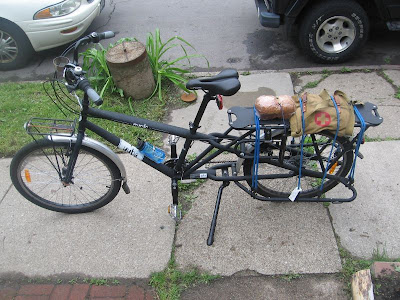 A freshly baked loaf of Roast Red Pepper-Parmesan Bread.
A canvas bag containing, among other things, three books, a day planner, and a camera. 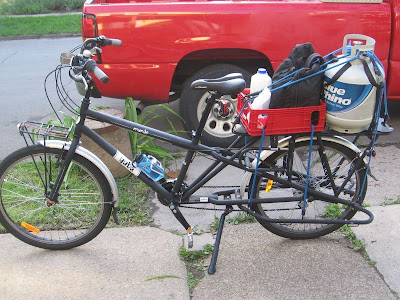 A quart of milk.
A tin of mixed nuts.
A can of coffee.
A gym bag full of wet clothes.
A 15lb canister of propane fuel.

So there I was pedaling down Allen Street on my short commute home from work. All I had on the Mundo was my bag and a loaf of bread. Allen Street is narrow and clogged with cars (was originally a cow tow path, I've read), and under normal circumstances a cyclist would stay clear of a car-clogged road like this. But what I like about it, other than it being my most direct rout home, is that it is so narrow and car-clogged that one can move at the same rate as car traffic. Indeed, often a bicycle can move faster than the traffic. And for this reason a cyclist can, and often has to because of the street's narrowness, ride in the street proper rather than on the sidelines. Anyhow, as aforementioned, I was merrily pedaling home...when all of a sudden I hear the car behind me start beeping short little toots, like they wanted me to pull over: beep-beep, beep-beep. Not even turning to look I just kept pedaling. They became more aggressive: beeep, beeep, beeeeeep! This went on for a full block; someone from the sidewalk even yelled, WTF! (Only they used the full phrase.) I had no problem keeping pace with the car ahead of me and knew the car behind me, the one beeping, had nowhere to go if I did pull over...so I kept going. Finally I approached a red light and pulled over a little. I could see the car pulling up next to me. I was fuming; I could feel those little veins in my forehead pulsing and was ready to spit verbal fire if they harassed me.

Instead, the passenger rolled down his window and said with a slight smile, "Hey buddy, your bag fell off your bike back there when you hit that pothole."

I was floored, and immediately felt like an ass. Here I was mentally calling the driver every name I could think of and he was simply being a Good Samaritan. All I could muster was a meager, thank you. I sheepishly turned my bike around and went back the block to retreive my bag, which indeed was lying there in the middle of the street. Luckily it did not get ran over by other cars or you wouldn't see these current pictures (as my camera was one of the bag's occupants).

My apologies to both of you, Good Samaritan driver and passenger. Sometimes Buffalo really does feel like the City of Good Neighbors, but even more importantly, I sometimes forget how good and kind many people--common strangers--can be to one another. Thank you for the reminder.

Dr C. said…
It is always nice to encounter a good Samaritan on the road. It is just a shame that we become so jaded by the endless tide of idiocy on the road that it becomes easy to miss things like this. I always assume unpleasantness when I hear a horn, I think it is partly down to the sound itself.
May 14, 2010 at 9:37 AM