Things That Can Be Carried On A Bike (#177)...and something a little scary 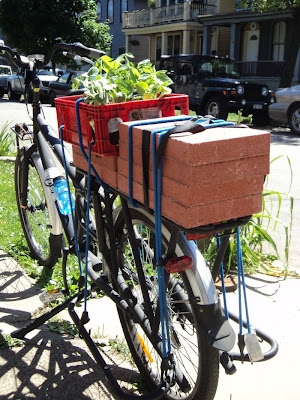 It's amazing that when you have 132lbs (60kg) of cement blocks on your bike you tend to notice even the slightest grade in the road.

Now on to the scary part, and no it has nothing to do with what I was carrying on my bike...it has more to do with where I went:

Yesterday I rode my bike into to the deep commercial suburbs.

It's interesting that when I ride in the city--where passing cars are close--I tend to ride in the road without fear. But in the suburbs I found myself riding on the sidewalk (pavements, for my friends in the U.K.)...and even then it was like a death game. At every entrance to a mall or other big box store I had to thoroughly check for traffic in all directions (and not in the normal intersection-type check, because these cars were flying), but mostly I yielded to cars that should have given me the right-of-way. On no fewer than 3 occasions did someone cut me off at an entrance to a parking lot...one was so close, in fact, that it prompted a passing truck driver to honk their horn at the violating driver. I truly believe if I would have riden in the road (pictured below) instead of on the sidewalk I wouldn't be here typing these words today. I don't know if I've ever felt such a blatant disregard for me as a bicyclist as I did yesterday...it was as if I were invisible. While I was only about 15 miles from my house I may as well have pedaled to Mars.

It felt good, to say the least, when I returned to my familiar turf and had young hep-cat fixies zipping past me on their sparsely adorned but brightly colored bikes. 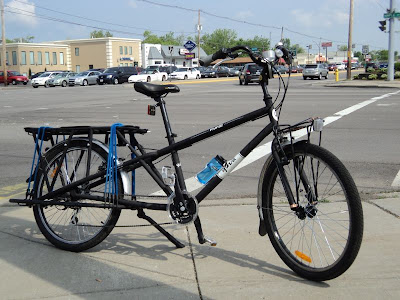 Dr C. said…
When I did my grandparental visti ride I had to leave the safety of the urban streets and enter suburbia (although a good 15 km of the trip is on a canal path which is lovely). Whenever I cycle much outside the city and enter the towns I notice that people tend to drive more aggressively and much faster and are less likely to use the next lane when overtaking, no matter how much of the lane I use. One guy looked nonplussedly at me whilst I struggled to calmly explain to him that 20 cm is not adequate clearance for overtaking me. Maybe I should have shouted and swore at him instead. Its a shame that these are the places most people choose to move to when they want to raise a family somewhere "safe."
June 1, 2010 at 11:39 AM