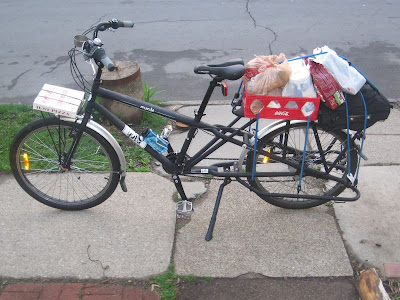 This is no confession...nor is it really anything new to this blog, I've said it before but I'll say it again. But with a different twist.

Riding a bike for me is mostly about selfish reasons: the biggest reason is that I really enjoy it. It's good for me physically, mentally, psychologically, and spiritually...it really does make me feel free. It also saves me a few dollars in petrol costs. And when I carry or haul stuff on my bike(s) it gives me a sense of accomplishment. I own a car (small truck, actually), and I've mentioned this in many posts. But I really enjoy riding bikes. Some readers have suggested (told me) to sell my truck. I shan't discuss it in an open forum such as this but I am unable to do this at present...but I may eventually.

I have to admit that riding to save the planet has never been a main mission of mine. Of course this is one of the reasons but not the biggest reason. I've always done it for more personal (some may say selfish) reasons mentioned above...until recently.

It's not as if I've had a bona-fide epiphany over this (maybe a minor epiphany), but this latest oil spill has really thrown me. We see and hear it every day in the news, and it's been going on so long it's gotten pushed back to the lesser news; it's no longer a "front page story"...but as I type these words oil is still spewing gallons and gallons of oil into the ocean. Even after (if) it's stopped, the future complications and devastation is going to be terrible.

It's incomprehensible to me.

What's really alarming is this recent article in The Atlantic. They state that the total amount of oil that has been spilled into the ocean (the article was published on June 7) is a mere tenth of what the U.S. consumes everyday.

It's interesting how this has affected me at a personal level. In the past couple weeks when I've reached for my helmet instead of my car keys (or chose to walk) I did it for all the aforementioned selfish reasons, but I also consciously did it not to consume gas, not for monetary reasons but ecological ones...to save the planet, however small my contribution may be.

I've thought of it this way. If this were something that happened in the past, (and by "this" I mean our lifestyle of being addicted to oil) I would want to ask my ancestors what they did to help, save, or preserve (but mostly respect) the planet they left for us. God only knows what we're leaving for future generations. Some day I hope to be a grandfather, and I also hope to be able to look my grandchild in the eyes and say that I did my part.

I am in no way attempting to get preachy here (though I am, I suppose); I speak solely for myself. This blog from the start has been an open diary of sorts. It began in the dead of winter on the notion of simplifying my life on many levels, one of them being riding my bike for any trip under two miles (click here for my original post). It was originally for personal reasons, but now it's global.

It has to be; we have no choice. 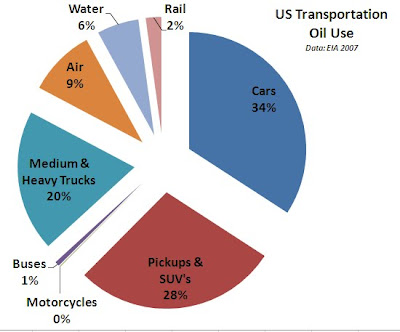 James D. Schwartz said…
Great post Joe. I feel that if the government can provide safe cycling routes for the average "Joe", then thousands and millions of more people will choose to take a bike for personal/selfish reasons.

No matter the reason a person chooses to take a bike, the benefit is a positive one for themselves and for society in general. If we consume less oil, then we can prevent (disturbing) disasters like the current one.

Mikael on Copenhagenize recently wrote an article that the number one reason people choose a bike is because it gets them to their destination faster. Here in Toronto, a bike is definitely the fastest way to get around the city - as long as you don't need to travel out to the 'burbs.

Unfortunately, with all of the sprawl we have in North America, the car is usually the fastest way to get around, so the challenge will be to win over the average suburban dweller.

I think we have our work cut out for us in winning over people in the suburbs. It will take really high gas prices, and great infrastructure to get people on two wheels.

David Anderson said…
Joe, I couldn't agree more. I am in the unique position where I could sell my SUV (which I did last summer): I live super close to grocery stores (big chains and small neighborhood), farmer's markets, within 3 miles of work, etc. Between my Xtracycle (which I ride almost every day) and my other bikes, I get most places I need to be. And I take public transportation when necessary. I also live in an appropriately sized house, in the city, garden in my back yard, recycle, reuse, etc. I don't do any of these things because "they're good for the environment", I do them because I enjoy them. Especially the bicycling :)
June 13, 2010 at 3:33 PM

John said…
Yes indeed, a great post. I am just starting to read "Why your world is about to get a whole lot smaller: Oil and the end of globalization" by Jeff Rubin. Interesting stuff. Hopefully we see a lot more bikes in the near future- we will be a healthier society in many ways.
June 14, 2010 at 1:47 AM

Dr C. said…
Good call on the post Joe. I have arrived at the ethical aspects of cycling in a similar manner. I returned to cycling after a 5 year break because I had to get to my crappy supermarket job as an undergraduate. At the time I was spending £35 a month for a city bus pass and I decided that if I spent £100 on a bike, and that bike didn't get stolen for at least 3 months I would make a profit by ditching the bus pass. Speaking to other people about this at the time it seemed that I was some kind of maverick for buying a bicycle to use as transport to cover all of 8 km (about 5 miles). What I got for that £100 was a lot more. At first the journey seemed long, but after 5 hours of manual shop work I came to love the cool ride home in the dark (around 11 pm). I started to use the bike for almost all of my transport needs; the bike had given me total freedom, more than bus reliance or even car reliance could, the only limit was my own ability to propel myself. Eventually I became interested in the maintenance of my bike, wanting to become even more self reliant. It started to occur to me that there was little need for most people to drive almost all of the journeys they did, and that by doing so they were contributing to the sort of problems we have now in the Gulf of Mexico. Eventually I realised that riding a bike helped me to reduce my share of the responsibility for disasters like this one, and for the longer term effects of oil dependence.