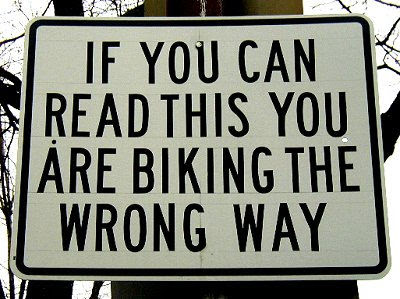 Photo Credit: Salim Virji via Streetsblog.net via Flicker
I mostly try to keep things on the positive side when posting on this blog (because I feel there is enough--way too much--negativity bombarding us these days) but every so often something annoys me enough that I have to hop up on my little soap box and throw in my two cents. This is one of those times.

But before I state my annoyance I first have to qualify this by stating that I myself am far from the perfect cyclist, but I do use common sense. I also try to show respect to myself, other cyclists, and people in cars. Now here's my beef:

What is the deal with bicyclists that travel in the wrong direction (against traffic) on busy streets? Tonight I was pedaling the Mundo down a busy street and a guy came straight at me, going against traffic. Our eyes locked and I could see he wasn't moving. To my right were parked cars and on my left were moving vehicles. My only option was to move slightly out into traffic to let him pass.

Wrong way cyclists really give us a bad reputation, not to mention putting many of us and motorists in danger. If I were not a cyclist and saw a person (or persons) riding like this I too would probably think bicycles were not worthy for road travel and should stay on the sidewalks (pavements). How can we be expected to be taken seriously with actions like this. Imagine the ramifications of a car or motorcycle going in the wrong direction. I really hope that eventually we, as cyclists, will be held accountable (myself included). The laws are in place in most area, they are simply not enforced. I'm sure if I received a traffic violation for coasting through a stop sign I would stop doing it. But more importantly we (in the States) would probably be more accepted by motorists as a viable mode of transport. In the past I have ranted against seemingly self-centered car drivers, but if we act foolishly we too are part of the problem. It is, after all, a two way street (pun intended).

Dr C. said…
I do find it annoying when people do this kind of thing, and I feel it can cost the rest of us a lot of goodwill.

The underlying cause of a lot of bad cycling is fear of being hit by motorised traffic. Some people teach their kids to cycle the wrong way so that they can see the oncoming cars. When they grow up they keep on doing it, possibly because they fear being hit from behind. Very close overtaking is commonplace and probably doesn't help matters much. Its the same with pavement riding and red light jumping, most people aren't trying to be reckless, they are afraid of being hit by cars, and the way people drive is a big problem.

I'm not trying to condone this kind of bad cycling, but I do understand it, and I see the sort of driving which encourages it every day.

Here in the UK we have some enforcement of red-light jumping cylists, but very little of red-light jumping motorists. the fines cyclists have been given for jumping the lights are pretty comparable to the fines motorists get for killing cyclists and pedestrians by driving without due care. It makes me think that it is no wonder that many cyclists don't consider themselves part of the traffic.
July 23, 2010 at 5:49 AM

the_big_smile said…
It is allways great to read your blog, George!
The sign on the foto shows a certain sense of humour by the authorities that but that sing in place. :-)

I have to admit: I use twice a day a oneway the wrong way. But there is is almost no traffic there and my alternative would be to go a crowded narrow street with a very narrow cycling path while towing a Charriot trailer.

But when I do things, I shouldn't do, I am allways very carfull against cars and pedestrians, because I hate cyclists who misbehave in traffic!
We should never do so!
July 24, 2010 at 2:49 PM