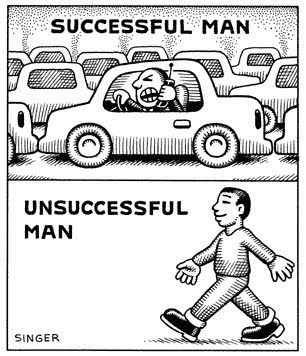 I love this cartoon...it goes against everything American society says is the image of success and happiness. I originally came across it in a magazine more than 10 years ago, and have it hanging in a small frame in my kitchen. I was prompted to re-post it after reading this article on the Treehugger website.  It was linked to this article at Slate's website citing how Hollywood moguls equate not having a car to being a loser. Well, I'm sorry Mr. Hollywood big shots (and I consciously use the masculine address), but not having a car does not make a person a loser. As stated in many previous posts I am not car-free, but I am car-lite, and I really feel the people who can afford a car but choose not to are real heroes in the times in which we live...I hope to eventually have the courage to go entirely car free. I can't tell you how how often I get weird vibes from people when I state that I choose not to drive when I can...it's not always a direct inquiry as to why (but sometimes it is...to which I'll often reply, "because I like to walk or ride my bike instead"), but sometimes it's just a little sideways comment. And at times I'll even begin to question myself, why at nearly 50 am I riding a bike. Then I get on one and remember why I do it. On my way home tonight I was taking a short-cut through a parking lot (ironic, right?) and it was on a slight incline. Ahead of me was another cyclist.  I was on my Mundo and going slightly faster than them and when I approached I could see that it was a women on a Dahon folder. As I passed her I said good evening and asked how she liked her bike, that I had a similar one at home. She told me she was recovering from surgery and hadn't been able to get on a bike for more than a month...and that it felt so good to ride again, "I told my family I was going around the block and I've been out more than an hour...I feel like a dog with it's head out the car window," (nice analogy, I thought, and more irony)..

I've also posted the below video before, but it's one of my favorites so I thought I'd post it again. If you'd like additional reinforcement towards a car-lite or car-free life click here (pdf file), here, here, or here. So, au contraire, Mr. Hollywood, when I choose to not use my car I am far from a loser...I'm free, and I'm a winner.

David Anderson said…
I couldn't agree more. Btw, Andy Singer, the guy who's comic you posted, does a bike series in Urban Velo that is terrific. Some of them are on his website:
http://www.andysinger.com/bikesample2.html
August 3, 2010 at 4:29 AM

drMolly, the BeanQueen said…
I did so enjoy the cartoon - what in the world makes people think one needs an auto to be successful??? Ours are tools - we live in rural WA state on the eastern side - ie. long way between places - and try to limit our use as much as we are able. I would love to be able to ride all places, but one must be aware of one's limitations, too. Thanks for the inspirations to try harder!
August 3, 2010 at 11:57 AM