Lamb Sausage Recipe with Feta, Parsley, and Rosemary (in pictures with a few comments) 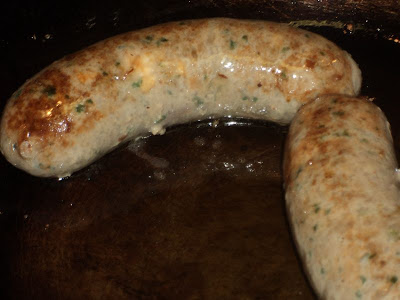 I once read a quote that there are two things a person should not see being made, one was sausage and the other I can't remember (if anyone is familiar with this quote let me know what the second one is...it's bothering me). But today, this can't be true. I think that the thing(s) no one should witness being made would be any sort of processed foods...or even worse, having a tour of a factory-style slaughter house (watch the movie Food Inc.).

On a small scale sausage making really fascinates me. Other than the aid of electric grinders it is done pretty much the same way as it has been for millennia. It began--and still serves the purpose--of not only making something really good to eat, but more so, it utilizes many parts of the animal (the casings are intestines, for one, but also lesser cuts of meat can be made tender by grinding them). And in regards to using an animal's intestines for the casing...first of all what's the difference if we eat its muscle (meat) or its intestine (casing)? It's all from the same animal...both are wholesome. And personally I would rather eat a natural casing than a synthetic one (man made).

The English word sausage is loosely based on the Latin salsus (after a transmutation through Old English as sausige). It's a word that means "salted" because that's exactly what it originally was...salted meat (for preservation) that was stuffed in an intestine or animal stomach. Interestingly, other words that have etymological connections to the same the same Latin word are salad, sauce, salt (of course), salsa, and even salary (slaves were paid in salt...hence the phrase, not worth his grain of salt).

In it's most basic form sausage is nothing more than ground and seasoned meat, which may or may not be stuffed into a casing (it can, of course, be cooked in a patty shape). One of my favorites of this patty style is a recipe based on a basic kibbeh recipe (lamb and bulgar), but any meat will do (pork is the most obvious choice). For a lamb and bulgar recipe (different than the pictorial recipe below) click here. It's a recipe I published some time ago and recently found it pirated when I did an ego search. Anyhow here's the sausage we made today, and no that is not me in the photos...it's Steve, one of my cooks at work who was learning the fine art of charcuterie. Thanks Steve, great job! (click any photo for a closer look) 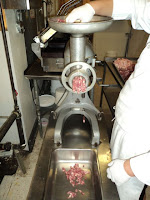 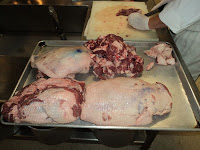 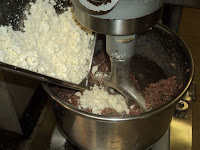 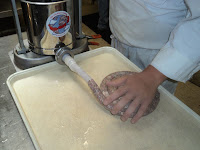 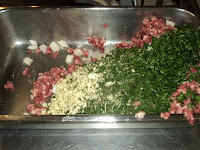 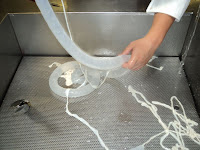 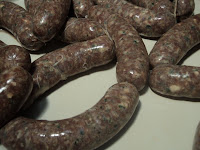 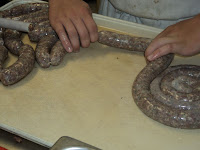 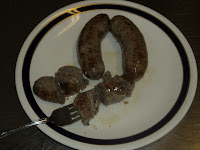 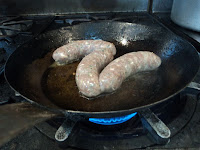 David Anderson said…
"Laws, like sausages, cease to inspire respect in proportion as we know how they are made." - John Godfrey Saxe (american poet).

There are more colorful versions misattributed to Otto von Bismark, but the quote above is thought to be the original.
August 7, 2010 at 6:59 AM