Things That Can Be Carried On A Bike (#210), and a quick comment about cargo bikes 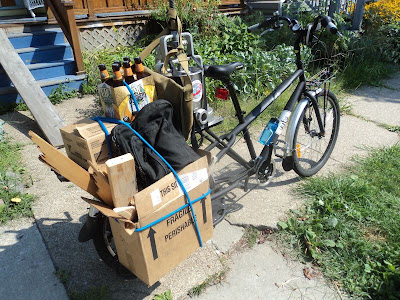 It's interesting that when I was originally out today and passed by an intersection where there was road construction going on I saw a couple of workers point and laugh at the Mundo (can you believe it). At the time all I was carrying on the bike was the gym bag. I may be being paranoid (about the jesting), but I doubt it. Anyhow, on the way back, and as I crossed the same intersection, I had the bike fully loaded. This time they just looked in awe (as their monster trucks stood on the sidelines just waiting to suck fuel). The best I can figure is that they had a temporary case of cargo-bike envy. Another interesting thing is that while there was a long row of cars (mostly containing single passengers) waiting on queue for the construction, I was able to pedal through without haste. 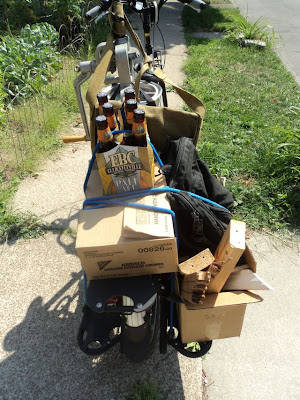 John said…
Perhaps on the second pass the construction workers were eyeing up your beer! There is a new challenge for us, how much beer can you carry on a Mundo.......
August 30, 2010 at 11:52 PM

Max said…
I bet they just didn't understand what they were looking at. I'm continually surprised by the (mostly) positive responses I get from a really broad range of people. Utility bikes in general are a beautifuly odd thing. But appreciation doesn't truly come until you understand their function.

Now, more importantly, beer. The only liquid I've carried in large quantities on the Mundo has been four big office water jugs. Two fit perfectly in a go-getter. So, I'd venture to say I could carry six kegs. To prove it I will allow you all to send me six kegs, and I'll post a video of it for viewing.
August 31, 2010 at 2:59 AM

the_big_smile said…
@John
You may be right, they just looked on the beer. ;-)

But it would be a great idea to try, how much beer will fit onto a mundo.

Joe said…
Thanks, everyone, for your comments. And I agree, they probably were mesmerized by the beer on a bike. I'm more of a wine drinker than I am beer (though I do like beer as well), and I received it as a gift. I have a full case (4-six packs for my friends in the EU) which I may be transporting this weekend by bike...of course there will be a photo. And max, let me know if you carry kegs (send photos; I'll post them). I do remember seeing somewhere on the Internet there are photos of a guy carrying a keg on a Mundo. Seems like it would be difficult because of the sloshing liquid.
August 31, 2010 at 10:02 PM