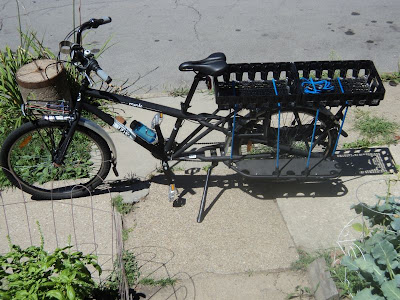 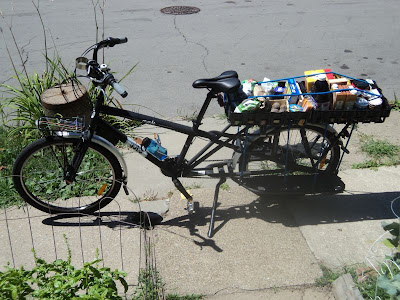 Uncharacteristically, I've displayed a before and after pictures of the Mundo. I did this to show the versitility of the bike...with two crates on the back it really becomes a sort of human powered pickup truck. And yes, this is a cargo bike (there are plenty of companies out there these days designing other types) but there are plenty of ways to get creative and carry stuff on a bike...my point is, it is possible: cargo bike or regular bike (but a cargo bike does make it easier). I've had thoughts of a bike like this long before I ever knew that they existed. As a teenager, a friend and I were trying to hatch a plan to cut a bike and weld extention bars to make it longer (not unlike an xtra cycle, I suppose). More recently, shortly before I discovered the Mundo website, I had plans of converting a tandem--which sits in my basement--into a single-person bike with a 4-foot long flatbed on the back. Again, my point is it is possible. Bikes can carry stuff (a lot of stuff), and it's way more fun than in a car. Parts of Europe and Asia have been doing this for decades...it's about time we, in North America, catch on (we did, in fact, use bikes for cargo in this country at one time...that is until we fell in love with the automobile). I think if more people used bikes for errands they would be surprised at how much fun it is and what a sense of accomplishment they'd feel. In the case of this load today, for example, if you drove a car to the store and carried home $82 worth of groceries would you consider it a fun or an accomplished task...probably not, but you may just complain at the cost of the prices (I still do that, even on a bike). But if you purchased the same groceries and carried them home on a bike on one of the most breathtakingly beautiful and idyllic days of the summer would you feel any different...well, I think we all know that answer to that one. 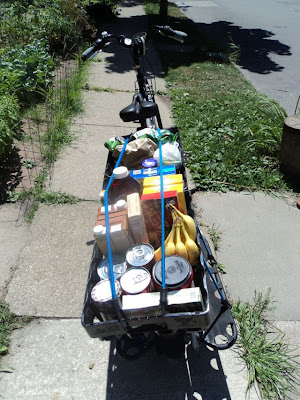 jim said…
You really nailed the essense of utility biking with this post. Enjoying the perfect day, accompolishing the tasks you needed to, and basking in the joy of knowing that you did it all under your own power. Ride on!
August 8, 2010 at 10:57 AM