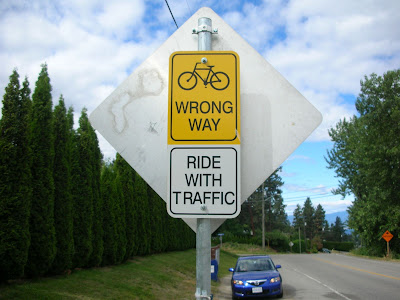 This image found here.
This subject is disheartening to me but sometimes I just have to highlight it. If you're a regular reader of this blog you know that I am a bicyclist that promotes not only bicycling as a viable form of transportation but I am also an advocate of bicyclist's rights and equality. For this reason it pains me when I see bicyclists behaving badly. Now please let me qualify this by saying that I do not think that I am the perfect law-abiding cyclist, far from it...I'm not even the perfect auto driver (but then again who is?). But, on the other hand, I try to ride in a way that meshes and blends with traffic rather than interrupts it (which puts more than the cyclist in harms way). While I am aware that many cyclists feel safer riding against traffic so they can see on-coming traffic it is really confusing to everyone. I have seen a great deal of this lately thus this post. I have witnessed it as a driver while behind the wheel of my vehicle, and even worse, I think, is when I've been on a bicycle (going with the flow of traffic) and a cyclist is coming at me; on a busy street it is like playing a deadly form of chicken...one eventually has to yield to the other. On one recent occasion I was coming back from an outdoor event I went to see downtown and was please to see so many cyclists out on a beautiful fall evening. I happened to be riding a young couple on my way home and to my dismay they began weaving back-and-forth in-and-out of traffic...at one point the young woman, who was trying to cross the street (to meet her friend who was going against the flow on the other side) actually rode the center line in between traffic going to-and-fro. It's no wonder motorists get mad at us. And recently, while having a conversation with a non-cyclist (but a serious walker) I felt ashamed and somewhat defensive as she spoke of the countless times she's nearly been hit by a cyclist whizzing down the sidewalk at a high rate of speed (my other peeve). This I've witnessed a lot lately also. There is a trendy section Elmwood Avenue in our city fair city, which is home to not only nice shops and restaurants...it is also prolific with fixies.  I can't tell you how many times I've been walking on the sidewalk and have heard someone say quickly, "behind you," or "on your right" (or worse yet no warning at all). Before you even understand what the person says a bike zips by, often so close they brush against you (and no, they are not all fixie hepcats). And I say again: It's no wonder non-cyclists get mad at us. At the very least all of these things (including simply riding a bicycle on the sidewalk) are illegal...what makes us, as cyclists think that we are above the law?

In order for cyclists to be taken seriously we have to ride in a responsible manner. Sometimes, like many things, it may seem daunting (how can I effect what others do?), but every little action each of us does matters and makes a difference. To quote Mahatma Gandhi, Be the change you want to see in the world.

'Nuff said...I'll get off my little soapbox now. 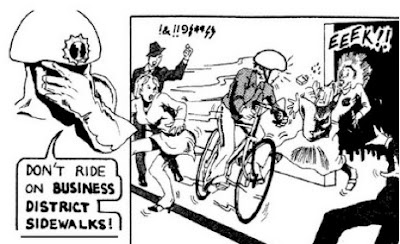 Joe said…
CH: When I read your earlier comment I figured it was meant for this post. And thanks...it's a great and inspiring story. Also, no worries about the comment's length...that's what these things are for. Thanks again for reading and commenting.
September 29, 2010 at 9:13 PM

Max said…
Against traffic riding was recently discussed on the local DC blog TheWashcycle.com, and in the discussion someone came up with the term "Salmon [on] bikes". I like the term, though I think it might be too insulting to salmon.
September 29, 2010 at 11:35 PM