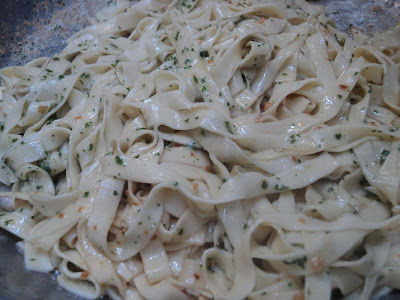 Today at work I made pasta by hand with a couple other cooks. It's so easy to make, and fun, too...but it is a little time consuming. We used hand-crank pasta rollers/cutters (which I carried to work on my bike), but you could just as easily roll it by hand and cut the noodles with a knife...they just wouldn't be as uniform. Most of the pasta I'll cut short and use as noodles in a chicken noodle soup, and some of the spinach dough we made will be served as staff lunch tossed with beef stew and tomato sauce. The picture above was a sample plate I made (had to taste it) where I simply tossed it with browned butter (what the French call beurre noisette) along with some browned garlic, parsley, and Parmesan cheese...this is really a butter version of the classic aglio e olio, or garlic and oil pasta; in this case, I suppose, it would be aglio e burro (garlic and butter). Whaterver the name it was purely delicious (I could eat food like this 7 days a week). Anyhow, below are a few pictures of the pasta being made, cut, and cooked. After the pictures there is a brief story I wrote for Artvoice paper some time ago, and included in the story--at the end--are a few recipes for homemade pasta dough. 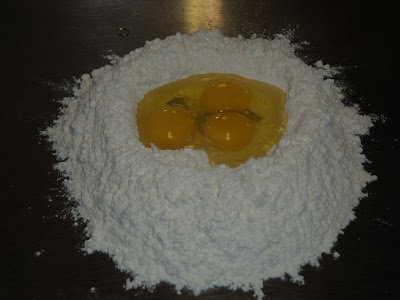 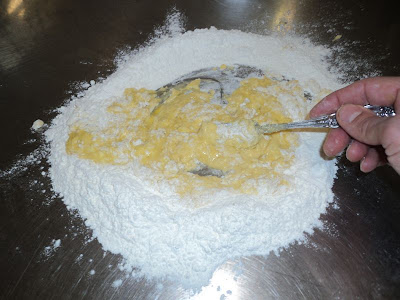 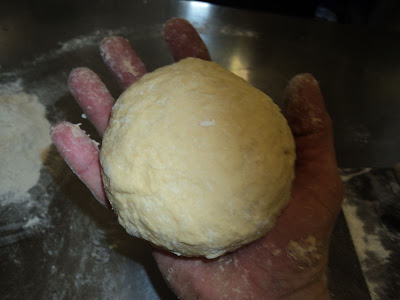 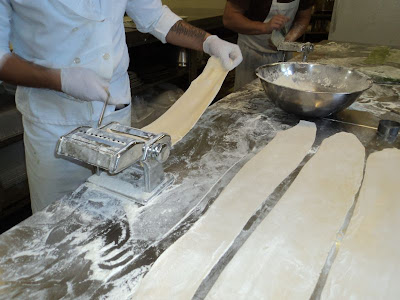 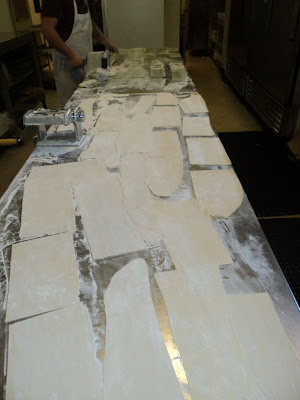 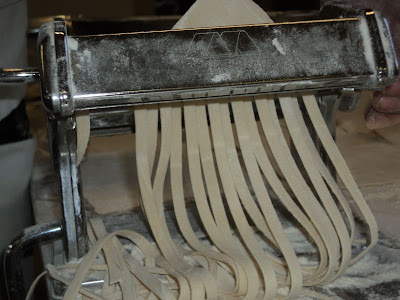 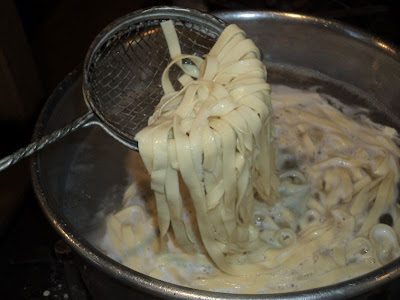 On Making Dough
In today's world that so often seems to be racing and spiraling out of control, and in a time when restaurant food performs gravity defying feats on a daily basis, there is no other therapeutic food to create with your hands than pasta. This is not to imply that pasta has curative properties, but rather, the act of making pasta can actually be a form of relaxation and meditative medium. It's a humble and inexpensive food, and can easily be an entire meal; in its most basic form pasta is simply a paste of eggs and flour.

The art of making pasta dough by hand is one that should be relished—ditto for bread dough. But with the proliferation of mechanical means—fancy electric mixers, food processors, bread machines, etc.—the age-old process of producing silky smooth pasta by hand is often overlooked and forgotten. Though it would be untrue to state that pasta mixed manually was an easy task, once mastered the process is quite enjoyable. The dough has to be mixed enough to develop the gluten in the flour, and then kneaded further until it starts to break some of the gluten down to a certain extent and incorporate some air into the dough, which, in turn, will yield a perfectly smooth and workable dough. One should not approach this task in an anticipated state of drudgery, but hopefully, with appreciation.

For inspiration while cooking, I'll often set before me the ingredients at hand, in the case of pasta this entails flour and eggs, and sometimes water, oil or salt. It's interesting to look at these few items and visualize their origins, functions, how they change when combined with one another and what the resulting product will be. Try to imagine the grains of flour swelling to accept the liquid, and the proteins aligning and clinging to themselves, almost fighting against the force of your hands to create structure in the dough. Ultimately, the ingredients will not be distinct and separate any longer, but something new, one single component or mass: dough. And though, I'm sure, that all of these ingredients were harvested separately with the use of mechanics, when they are set out in their most simple and basic form, it often seems unsuitable to mix the dough with anything other than your hands.

Pasta is, as its name suggests, a paste. The paste is most often made with flour and eggs, water sometimes replaces all or a portion of the eggs; vegetable purées can be added, and also salt, oil, herbs or spices. There is no need for special equipment; your hands are the best tools that you can ever own. The finished dough can be rolled and cut using a simple rolling pin and large knife, or with the aid of a hand-cranked pasta machine, the latter taking less effort and offering more consistent results.

There is no denying that for a beginner, to make pasta by hand takes practice—the making of the dough is actually very easy, it's the kneading and rolling that takes quite a bit of effort. The incredibly inspirational writer and culinary educator Madeleine Kamman states the benefits of making pasta entirely by hand in her voluminous book The New Making of a Cook. One of the benefits, she says, is that you will be 1 or 2 pounds lighter in weight upon completing the task.

To make a basic egg dough begin by mounding an appropriate amount of flour on a counter or table, and make an indentation, or "well" in the center of the mound; crack eggs directly into the well. If you decide to use water, oil, salt or other flavorings, add these ingredients now. Using an ordinary dinner fork, start to beat the eggs as if you were scrambling them. As you do this, begin to incorporate some of the flour into the eggs. When enough flour has been combined with the eggs to form a loose paste or batter, mix in the rest of the flour with your hands and bunch it together to form a crumbly ball. Begin to knead the dough by pushing and stretching it away from you with the heel of your hand, then fold it and pull it back towards you with your fingers. In a very short while you will have before you a homogenous ball of dough, that's the easy part. The more difficult process is to knead it for another 15 minutes. What you have to do is develop the gluten in the dough which will give it strength, and then knead it beyond that point until it starts to break some of this gluten down, which will make a smooth dough that is easy to work with. Eventually, after a sufficient amount of kneading, you'll note a change in the dough—it will become much smoother, slightly lighter in color and more pliable. Wrap the dough in plastic and set it aside for 30 minutes, the gluten needs to relax.

After the pasta has rested it can be rolled out to a desired thickness (roll it thinner than actually needed as it will swell when boiled). This done, it can be cut into any number of shapes, or used for lasagna, ravioli or tortellini. Raw sheets of dough can also be floured and layered between sheets of parchment then frozen for future use.

Cooking fresh pasta takes a fraction of the time as dried. It needs only 3 or 4 minutes to thoroughly cook in rapidly boiling water; stuffed pasta takes longer to cook for obvious reasons.

The next time you've time on your hands and are searching for culinary inspiration, make pasta by hand. It will be good for you.

Place 2-1/2 cups of the flour in a mound on a worktable and make a well in the center. In the well, place the eggs, water and salt. Using a fork, beat the liquids and slowly incorporate the flour.

Roast the pepper by placing it directly over an open flame, either on stove indoors, or for a smokier flavor, over an outdoor grill. Cook the pepper until the skin is almost entirely black, then place it in a paper bag. After the pepper has been resting in the bag for 5 minutes, remove it from the bag and rinse it under cold running water and rub the charred skin away. Gently tear open the pepper and remove and discard the seeds and stem. Purée the pepper in a blender until it is perfectly smooth, then pour the purée into a measuring cup. The purée should measure 1/2 cup, if it does not, add enough water to compensate. On the other hand, if the purée is greater than 1/2 cup, remove the excess portion and reserve for future use.

Mound the flour on a worktable and make a well in the center. In the well, place the eggs, pepper purée and salt. Using a fork, beat the liquids and slowly incorporate the flour.

When the liquids are fully incorporated into the flour begin to knead the dough. Knead the pasta dough for 15 minutes. Wrap the dough in plastic wrap, refrigerate it and allow it to rest for at least 30 minutes before using.


Combine the flours together in a small bowl, then mound 2-1/2 cups of the mixed flours onto a worktable and make a well in the center. In the well, place the eggs, water and salt. Using a fork, beat the liquids and slowly incorporate the flour.

You are very generous with your time in presenting all of this information to your readers.

Thanks from a grateful reader ....

Workaholic #242 said…
That's it. I'm leaving the industry I'm currently in and enrolling in culinary. You've inspired me. That looks amazing!
September 22, 2010 at 9:27 AM

Joe said…
Dan: Thanks, as always, for reading and commenting. I write this blog because I enjoy it...and it keeps me out of trouble in the evenings :)

Workaholic: Thanks for the kudos...but I'd be careful...the culinary industry is a lot of hours for low pay...but it is still fun.

Captain Hairdo said…
I made the pasta this weekend, just the basic stuff, and it was very easy. I made two mistakes though- 1)I don't think I rolled it out thinly enough, and 2) I didn't cut it uniformly. Consequently, the thinner pieces were great but the thicker ones were chewy, doughy. Overall not bad for my first time I guess, and I know what to do different next time. Maybe I'll pick up some kind of cutter or press. Thanks for the recipe and encouragement!
September 27, 2010 at 5:42 PM

Joe said…
CH: That is awesome...through this blog I've actually inspired a few people to ride bikes (which I still find hard to believe and do not take full credit for) but you are the first (that I know of) who has made pasta after reading one of my posts. Excellent! Cooking is such an excellent activity...it truly does, I believe feed both body and soul. As someone who cooks at work everyday in large quantities one of my most therapeutic practices is to cook for my son and I while listening to the evening news and drinking a glass of wine. At any rate, you don't need any fancy cutters, but they may make it a little easier. But you are correct in that you probably didn't roll it thin enough if it were tough or doughy...thin is good. It's be better the next time you make it. Thanks for reading and commenting.
September 27, 2010 at 9:27 PM