My Favorite Kitchen Knife (and a brief story behind it) 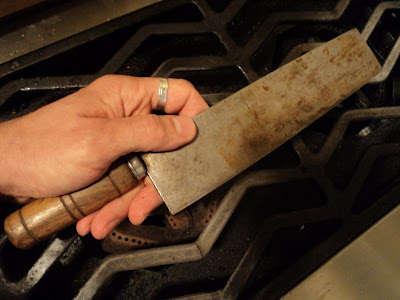 Firstly I have to give the reader a little history regarding me and kitchen knives/utensils. By nature I am a collector, not so much these days but I was in the past. When I was a young culinarian I collected not only cookbooks but also kitchen knives. Before the 9/11 days a person could--as many know--fly with most anything...I actually flew home from Paris once with knives in my carry-on. They were discovered during inspection and I told them I was a chef...they let me through (incredible, right?). So needless to say I, like most professional cooks, have many kitchen knives. And yes, I have many of the expensive top brands, but this simple and inexpensive Chinese cook's knife remains one of my favorites. The blade is made out of carbon steel, not stainless, which means it shows stains (and rust if put away wet) but it also means it is easy to sharpen...it is usually razor-sharp. On the blade is stamped first with Chinese characters (which I cannot read) and then in simple English: Chopping Knife. I have used this knife in many restaurant kitchens but it is my favorite home-kitchen knife...it is one of the most versatile. And like any favorite object that a person has in their posessiion I can remember when and where I acquired it. It was the summer of 1985; July 3rd to be exact. I was a student at the Culinary Institute of America and in NYC for the holiday. We spent many weekends and off-days in the city, and as was often the case we spent the days going from one bar to the next...this day was no exception. While stumbling through Chinatown, and with a brief stop for sake, we came upon a shop that sold kitchen-wares...we were all cooks so we looked. This is where I bought this knife...for something like $20.00. The women who sold it to me deftly wrapped the blade in multiple layers of newspaper but left the handle sticking out. I tucked it under my arm. Later while on a crowded subway we swayed a little more than the other passengers because of the alcohol. At any rate, for reasons I still find unexplainable the knife slipped from it's newspaper sheath and fell to the floor. You wouldn't think it would be heard on a crowded subway but it was. I'll just say this: if you want to see people in a crowded subway car scatter to opposite ends have a group of drunk guys drop a gleaming cleaver in the middle of it. As I bent to pick it up one of my friends slurred, "It's ok, we're cook's" (Paul, are you reading this?). I think of this story now-and-again. I think of it of fond drunken innocence of days past, but also of what a different world it was 25 years ago. If this would happen today not only would I probably have been tackled and restrained until authorities arrived, but the incident would have simultaneously appeared on the internet and twittered across the world. Anyhow, this is the brief story behind one of my favorite knives.
Email Post

Jim said…
That's a great story. I appreciate the value of a time-honored (and time-proven) tool or utensil, not just for its utility but also as a touchstone for the connected memories - like your subway experience!

Incidentally, I read an interesting article about a knife-sharpening business recently. Your post gives me some context for how uncomfortable it could feel to entrust your knives to an outside service. http://www.nytimes.com/2010/09/04/business/04knife.html
September 6, 2010 at 10:23 AM