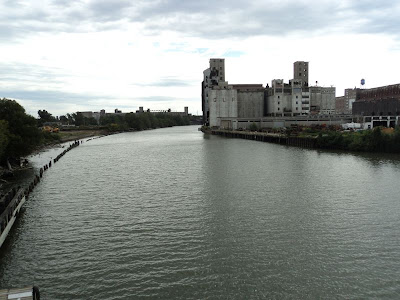 This morning I woke feeling somewhat melancholy...had tons I wanted to do (overwhelmed), but being Labor Day I decided to take the day off and go for a bike ride. One of the best things I can think of for a person to do when they are feeling a little down is to get physical exercise. I'm a regular lap-swimmer, but the pool is closed for yearly maintenance, and while I actually enjoy running I'm concerned about the wear-and-tear it does to my middle-aged body. So what a better way to get a good workout than ride a 60lb. bike for 15 miles in a strong headwind. And on a bike you can sight-see while you're exercising. What I find truly interesting is to sight-see in my own city. Buffalo, like many northeastern  cities, is a shrinking city, and many of the outlying neighborhoods are impoverished, but this is an old American city with such an interesting and influential past...and so many interesting things to see. After stopping for coffee I headed down first to the waterfront, and then to the cobblestone district and on to the Michigan Avenue Bridge to marvel at the grain elevators at the Buffalo River. Then I rode Michigan Avenue down to Main Street, which cuts directly though Buffalo's East Side. On the way I stopped and sat for a moment, and said a prayer, in front of the historic Michigan Street Church...thanking our city's ancestors for their courage to play such a big part in the Underground Railroad (Michigan Avenue is in fact also named Harriet Tubman Way). I was trying to live in the presence of gratitude today and as I rode further north on Michigan there was a long and gradual decline in the road--something you probably would not notice if in a car--and as I let my own weight carry me I coasted for about 5 blocks and was thankful for the slope and that I was riding a bike (so much for the exercise part, right?). As I coasted (pretty fast, I might add) I noticed the below restaurant with hand-painted wall. I have always, since as long as I can remember, pondered the meaning of life...don't mean to get all sappy here, but I have. Like what's it all about? At any rate, as I coasted along I was pondering just that thought when I spotted this wall..."Real Life, You're Livin' it." I slammed on the brakes and snapped a photo. Shortly thereafter the sun came out and I felt good; I was on a bike and I had a lot to be thankful for...I was livin' real life. And as I finish this post I think again, as I've wondered in the past--in personal thought and written posts--what keeps adults off bikes...they (bikes) are not only good for their bodies and the environment, they can be good for their very psychological and spiritual  well being. At any rate, today as I rode, pedaled, and coasted (and sweat!)...I was glad and grateful that I was able to be on a bike on this beautiful late summer's day. 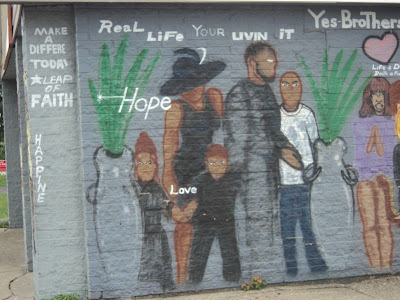 It sounds as though you had a wonderful day. You seem to be early in your Thanksgiving Day comments but you are of course right - we should be thankful for every breath.

There's nothing up with coasting, I can't think of any better way of making cycling look easy to anyone who doesn't cycle. It's a free ride & there to be enjoyed!
September 7, 2010 at 5:53 AM

kimsimplyme said…
Good morning...
I loved this post. Truly. It's funny, but ironically I had one of those reflective days yesterday myself. I instead meandered about the Japanese Gardens and then around Hoyt Lake. It's soothing how one can reflect simply by going to spots where the beauty is overlooked. Thank you. You phrased it beautifully.
September 7, 2010 at 9:22 AM