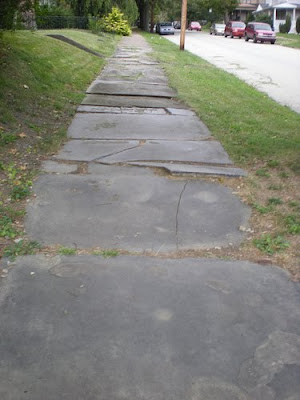 Photo found here.
You probably know by now that I am a big proponent of bicyclist riding in the street, opposed to on the sidewalk. To take it even further, I believe that bicyclists have the same rights (and responsibilities) as auto drivers...I've gotten into arguments over this. And I'd be a rich man if I had a penny for every time a person told me--either to my face or yelled out a car window--to get off the street. But on occasion I do ride on the sidewalks; not very often but occasionally, usually when I do not feel safe on the street. Tonight was one of those times. I had just gotten out of work, it was dark, the street is not well-lit, and cars on this stretch of this particular street treat it like a highway rather than a city street (there is actually street-construction in progress to reconfigure the closest intersection to slow traffic). The street is also one-way, so by traversing about 100 feet of sidewalk (in the opposite direction) I save about a half mile of going around a large city block. The sidewalk--which looks similar to the one in the above photo--is made of old slate. It's cracked and buckled. Thus I was traveling about a mile an hour down this sidewalk...indeed a person could probably have walked faster than I was coasting. I was on my Dahon folder and carrying a few pounds of leftover beef on the handlebars for my dog's dinner (scraped from half-eaten plates) . Anyhow, speaking of dogs, as I coasted past a guy walking a large poodle it lunges at me (many think these dogs are just cute, but they are exceedingly smart and can be vicious)...maybe it was the beef on my handlebars. At any rate, the dog's teeth come a couple inches from my leg when the owner pulls hard on the leash...then he shakes his finger at me and says, "see, that's what you get...you're not supposed to be riding on the sidewalk." I suppose he was right...but I was infuriated anyhow, mostly because he was telling me (here's my ego kicking in) where I should-and-shouldn't be riding...after all, I believe bicycles belong on the street not the sidewalk.  But something tells me his cute-but-crazy dog would have tried to have me for a snack whether I coasted past him on a bike or walked. I was flustered and angry at the same time...all I could muster, as I kept coasting, was, "do you know how many times people have told me to get outta the street (I never was very good at on-the-spot verbal responses). None-the-less, while my ego was little bruised I'm glad I made it home without a dog bite, but from now on I think I'll stick to the street...even if it means going the long way around. 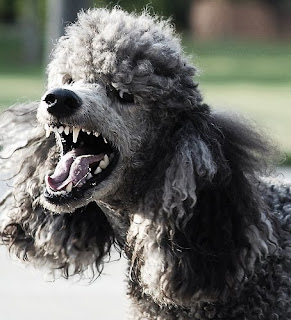 the_big_smile said…
Well, it's true. Bicyclists are suppossed to dematerialise. ;-) Car drivers want us out of the street and pedestrians want us out of the sidewalks.
The pedestrians are right, I think. Riding a bike on sidewalks is dangerous to pedestrians and to bicyclists as well. Cars will never expect a bicylist on the sidewalk, so they will hit you on every occasion your ways might cross.
As I said before: Dematerialise! ;-)

Fortunately over here in Germany it is not that hard, to ride bicycles. But you can feel, the car drivers don't want you on the streets. But only very seldom the will really show that.

When I read about the poodle, my first thought was: Maybe he would have attacked you as pedestrian as well.

Joe said…
Same here. I'm a dog lover also, but never really liked poodles...the little ones seem yappy and the big ones scare me a little.
September 12, 2010 at 9:31 AM

Max said…
It is ironic, and sad, that the most brilliant form of mechanized transportion is so marginalized, and not embraced.

I'm also typically an ardent road using cyclist, though since transporting my kids on the Mundo I too have found myself increasingly bending this rule. Not for great distances or anything, just as mini connectors between the safer sections. It's very saddening to feel so "designed-out" of an environment.

Joe said…
Max, glad to hear you're transporting your kids on the Mundo. I didn't get my Mundo until my son was a little older...he's 15 and would be horrified to be seen on the back of his dad's bike.

I'm also starting to reconsider my cycle routes...the street I live on, for example, is one-way and I go the wrong way on it on a daily basis...I'm thinking of starting to go around the block to follow the rules. Maybe.
September 12, 2010 at 9:42 PM

Andy in Germany said…
My fist though was what a picturesque path, but I'd hate to be a wheelchair user.

Big Smile has summed up the local situation well: German drivers are rarely as aggressive to us as others. I tell people that after riding for years in the UK, Germany is a picnic.

That should be "My first thought..."