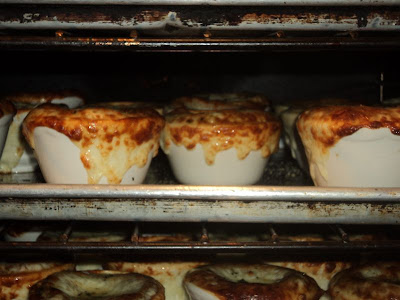 French onion soup. This is such a simple soup to make and while it may have the reputation of being a "restaurant recipe" it probably began as a peasant food and is exceedingly simple to make. Look at the main ingredients: Onions, broth, and bread (cheese was a later addition). Old-time soups often contained bread to make a meager meal more substantial. In fact the English words supper and and soup both come from the Old English sup, meaning to eat (as in, did you sup today?). Anyhow, I made this at work today for a party of about 180 and thought I'd post a few pictures. There's a recipe that is listed after the pictures and the only difference in that and the soup I made today (other than the size of the recipe) is that I also added a bit of sugar and dry sherry to the soup. Anyhow, here it is in pictures. 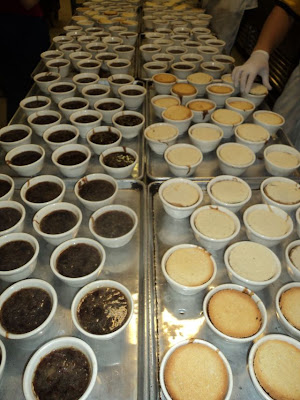 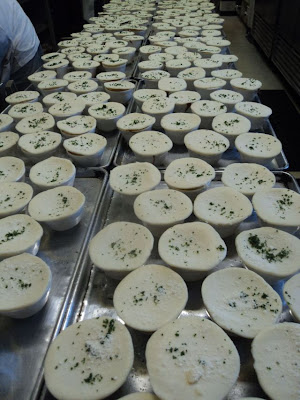 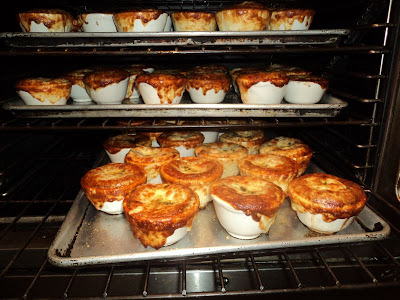 Melt the butter and oil in a heavy saucepan. Add the onions and sauté over low heat until onions are golden brown, about 40 minutes. Stir in the beef and chicken stock, bring to a boil, lower the heat to a simmer and cook the soup for 30 minutes. Season the soup with salt and pepper. Ladle the soup into oven-proof bowls and top each soup with a slice of French bread and the grated cheeses. Bake in a 375 degree oven for about 20 minutes, or until cheese is melted and golden brown.
Email Post