Things That Can Be Carried On A Bike (#215 & 216)...and a few comments regarding the seemingly never-ending adventure of carrying stuff on a bike. 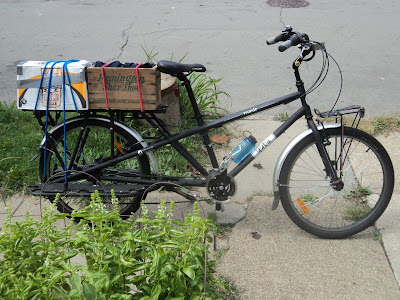 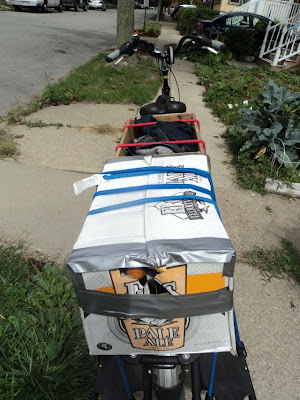 A wooden box containing, among other things, a few spare tools, an inner-tube, a small hand pump, and a spare jacket. Also, a case of Ellicottville Pale Ale.

The comment about this post is not mine but from someone else, and those are always a little better anyhow. On my way to my sister and brother-in-law's house I stopped for a quick lunch at a taco place; I sat in the window and had the Mundo locked up outside (I wanted to be able to keep my eye on the beer). Anyhow, a young family sits at the counter next to me (mom, dad; two kids) and the man says, "Look at that bike...pretty cool." To which the woman replied, "Honey, if we had a couple of those we could carry the entire family." Barely hearing her (my assumption) he says in an almost low whisper, "...and it carries a full case of beer."

A wooden box containing the same said ingredients above, but now also includes a pint of creosote remover, a tube of chimney putty, 4 paint brushes, and a stir stick. Also, a gallon of porch paint (on lower sidebar), a DVD (front rack), and a cardboard box containing 1/2 gallon of milk, a 1/2 gallon of juice, a dozen eggs, a quart of tomato puree, 3 bananas, and 8 ounces of shredded Parmesan cheese.

What was interesting about this load is not so much what I carried but how I ended up packing some of it. I was on my way home from my sisters (and no, I did not consume a case of beer...just one) and did some errands, which included purchasing a few food items. I didn't have one of my plastic crates with me that I usually use to carry loose items and the wooden box was already full. As I stood at the register I could see there were a few boxes behind the counter, so I asked if I could have one. "Um, no, you don't want one of those...they're dirty." I told him I was carrying the food on my bike and it would make it easier...he in turn proceeded to triple bag the food items. Now I am not totally against plastic bags (OK, I am a little against them) but I try not to use them when possible...they just accumulate under my kitchen cupboard. At any rate, after convincing him that I didn't want bags, and accepting the fact that he wouldn't give me one of the "dirty boxes," a carried the items in my arms out to the bike. On the way I came upon a couple cardboard boxes next to the building. They looked as if they were just emptied and did not appear to be dirty. It worked just fine. 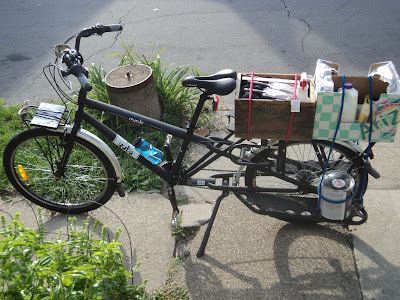 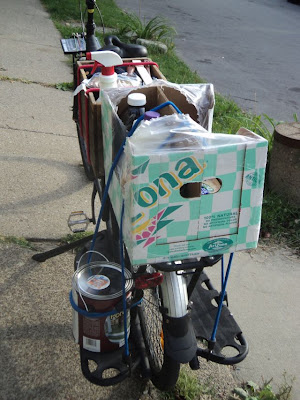 You are an inspiration.

It seems as though your single leg stand is working well. Do you still have plans for the 2 leg stand?

Joe said…
Jeff, the creosote remover is actually a preventative measure...you spray it on the logs as they burn...can't believe it's that time of year...the summer went so fast.
September 20, 2010 at 10:48 PM