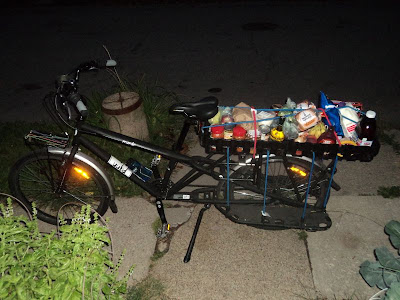 I had a crazy-busy and super stressful day at work today and really wanted to go for a steam and a quick power swim at the JCC but to my dismay I discovered that the center closed at 6pm for the holiday (it was 5:45 when I arrived). I was in an exhausted, grumpy mood, and had a headache...this only made it worse. At any rate, I did my grocery shopping, which I had planned on doing anyhow. And as I came out of the second store and began loading the stuff into the crates on the Mundo I was amazed at the incredible beauty and hue of the sky...the below photo does not do it justice (it was taken about 20 minutes later when I arrived home). The sky above and all around was a gentle pastel pink and seemed as if it were glowing. To my right (west) it was bright yellow where the sun was setting. There were wispy clouds high up that gave the sky, for lack of better words, a three dimensional look. Looking around it looked as if there were a gentle pink light illuminating the city. As I got on my bike and began to ride I noticed other people looking, and some even pointing at the sky. When I stopped at an intersection there was a guy there looking up and I commented on the sky (and it's very unlike me to strike up a conversation with a stranger)...he looked at me and said simply "Amazing." I rode slowly home looking mostly at the sky (I'm sure I looked pretty odd), and I thought--as I often do--how this would not be nearly as nice if I were in a car (and I am not totally anti-cars--I have, in fact recently driven more than I'd like to admit--but I am pro-bike). As I pedaled slowly and coasted I really tried to be present in the moment and enjoy this perfectly beautiful fall evening. And as I did this I could feel the stress dissolving and melt away. By the time I arrived home the light had changed and it was almost dark...and I felt like a new person. 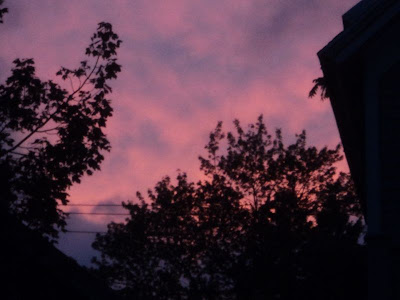 I'm sorry you had a stressful day. I do thank you though for sharing such a beautiful image though. It made me smile and think that inspite of all that is stressful, seeing something that is so simple and a gift of nature can in fact make all the difference in the world. Your perspective shows this and is an example of that.

I hope you have a peaceful evening and tomorrow is a new day full of new experiences. Please take care.
September 29, 2010 at 9:33 PM

You and I are only 30 miles apart. The sky was the same here - breathtaking.