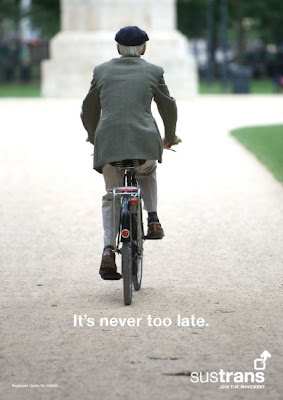 I've used this photo in a post before but like it so much I thought I'd re-post it (It's borrowed from Sustrans).
I thought I'd re-post this photo because I was thinking recently--contemplating, really--about what the hell I'm doing. What I mean by this is why, at nearly 50, do I still prefer to walk or ride a bike than drive in a vehicle. Not always, but most of the time. Being a middle-aged guy on a bike in an American city is no easy task at times...I am fully aware that most riders are half my age. And by riders I mean people that use their bikes as transportation (and in all weather conditions) and not as a once-a-month jaunt in the park for recreation when the sun is shining. Even on this blog--whose readership I think is divided equally between those who come here for cooking and baking and those that are here for bike related posts--the bikers are much younger than myself. I guess what bothers me--and this is not the phrase that really articulates what I am trying to say but it's the best I have at present--what bothers me is not that I am older than many (or most) riders I see...it's that there are not more people "of a certain age" out there on bikes.

At what point, I wonder, do people abandon their bikes for cars? I know when I was growing up we all had bikes...now most my age it seems are in cars. If I had a dime for every time someone told me something like, "back when I was in high school (or college or whenever) I used my bike to get everywhere," I'd be a rich man. I sometimes tell them that they can still do it, at least part of the time...but I usually don't. Sometimes I really feel it's just the stigma of an adult (in America) using a bike as their main mode of transport. That is the silliest thing I can think of because coasting on a bicycle with the wind on your face is way more fun, and often more dignified (I think) than sitting on a car-couch and pressing a gas pedal. I really and truly believe that if more people hopped back on that old 10-speed or mountain bike that they have collecting dust in their basement or garage they would remember what it was like...the joy and feeling of freedom it gave them.

Now here's a quick story of what prompted me to write this little rant:

I was in a local bike shop today pricing studded snow tires (yes, they make them for bikes). The owner of the shop was helping another customer. He had just purchased a lock, and it was the type you could program to have a personalized numeric combination. He was having trouble with it and asked for assistance. What would you like the combination to be, the owner of the shop asked him? Why don't you set it to the year I was born, he said, that was a good year...set the numbers to 1920.

After the guy left I asked the owner if he still rode a bike. Well, he said, he gave it up for a while because of balancing difficulties and his hips started bothering him so bad he had to use a walker. So he recently bought an adult trike and because of the exercise he no longer needs the walker.

Sometimes when I ride bikes it makes feel like a kid and I wonder if I'm just being immature. But then I come to that slight incline in the road or the wind shifts to my back and I coast and I come to my senses. It's taken me a long time to figure out I want to be "when I grow up" but I think I finally have. When I grow up I want to be an old man...an old man that still rides a bike.
Email Post

Max said…
As a 44 year-old utility cyclist I really enjoyed this post.

I'll have to say though, I actually see more "mature" utility riders in my area (pseudo suburban MD/DC). I think the big trick for the people in this country is for them to realize they can actually do everyday things on a bike, not just carry it on the car to the trail.

You mentioned people getting out those old dusty bikes and trying riding again. I think this does happen a bit, though I know for many they might feel less comfortable (if they had ever been in the first place) with the positioning, and they promptly abandon the thought. Sometimes those old bikes, bought under different, youth-driven, American bike industry fed circumstances, never did feel that great, but were the style of bike for the time. Then the trick is to recognize that we're different at different ages, and to know how to swallow the machismo of middle-age and put on some upright bars. Luckily, trend seems to show we're evolving out of the racer mindset.

And funny you should mention trikes, as I have a Christiania coming, for the immediate purpose of being my foul weather kid hauler, though I definitely see a place for it in my "retirement". Maybe some sort of less-than-speedy delivery service, or rag man.

Tangent: Have you seen this? -


I think it is really funny how witnessing "different" riding impacts people. The Mundo, and hauling kids and/or cargo opens eyes and minds, and makes people think, even if just for a brief instant, a little differently. I see/hear it all the time. I liken it to sowing seeds of change.

This post made me smile, smile, smile!
In November this year I'll become 47 and I still ride.
There where times in my life, when I had no time to ride and had a car, but these where not the happiest times.

Mid of December 2009 I decided to try, if I could make it through the winter without using the car more than I really needed to.
Two times I had to have my car jumpstarted, when I needed it.
End of June I finally sold my car, because it would have needed mayor repairs, that I didn't wanted to pay for.

But sometimes I am wondering, how I will ride the bike in 20 years.

Your story about the old man with his trike is a good example.

It reminded me of a bell, I had on one of my bikes, when I was about 10 years old.
On that bell was written: "Auf zwei Rädern bleibt man jung"
Wich means: "On two wheels you will stay young"

David Anderson said…
Joe, my parents are car-free for the most part. My dad rides his bike every day, both to commute and for exercise/pleasure. He eats just about whatever he wants because he rides so much. Last winter I hooked him up with studded tires so he wouldn't go down on the ice. I'm expecting him to come over late November for the switch again.

My mom, who has diabetes and high blood pressure, began being seriously car-free about two years ago. She thinks nothing of riding 14 miles (one way!) to her doctor's office. She does all her shopping (they live less than a mile from two grocery stores) and errand running with it. As a result of riding, she's lost weight, her blood pressure is better, and her diabetes is a lot better.

As a family, we've been largely car-free for much of my life. Right now, only my sister (in her young 20s) owns a car. We'll get her switched in a few years :)

My parents aren't big blog readers (much less comment posters) but I do share your blog with them. I think there's a lot of other people out there who are like them.

Joe said…
Wow. You guys are inspiring. I needed it. Thanks for your comments. And what an interesting group: 2 Americans, a Canadian, and a German.

Dan, I'm planning a trip to TO in November or December, I'll make sure to let you know so we can have a coffee or beer.

Max, that link is awesome...I'll post about it in a couple minutes. Being in the food industry I often think about what I could use the Mundo for...I've actually thought about using it to feed those less fortunate, or at least bring sandwiches and coffee...just in the thought process at this point.

Big Smile, I love the quote, "Auf zwei Rädern bleibt man jung," do you mind if I quote your quote sometime? And by the way, nice photos of vegetables on your blog...hope the soup came out good :)

David, Thanks as always for your insight...your family history (being nearly car free) is impressive, especially in our area.

And the soup was great. We had a boiled chicken on sunday. (My wife and my children like the chicken boiled.)
And we use the broth for a soup on monday and tuesday.
October 30, 2010 at 4:02 AM