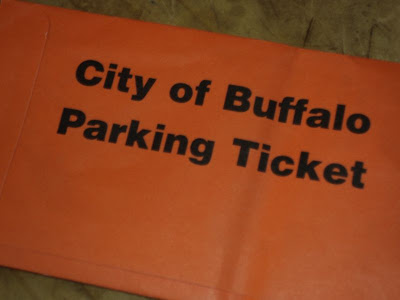 Ok, fist you're probably wondering why I am writing about cars on a blog like this. Well as I've said in the past I am not car-free, just car-lite...sometimes lighter than others. I am also not a person that is against you having a car...that's you're business not mine. I just find that riding bicycles makes more sense to me most of the time, and on many levels...when I'm on a bike I usually feel free; when I'm in my car I often feel bored or agitated by traffic. And while this blog is meant to promote bicycles and a general simpler way of living in the city (mostly these posts are reminders for myself), it is definitly not attempting to be an anti-car blog...again, driving a car is your business. But if you are reading this blog--or more specifically, if you are a regular reader of this blog--something tells me you agree with this at least to a certain level.

If I had to sum it up in a more specific definition I would say that this blog is more about bicycles being accepted by motorists and not thought of as mere toys. But as is often the case, I'm getting off topic. Here's the real meaning f this post.

In the past month I have driven my vehicle maybe 4 or 5 times; this is relatively easy to do when the weather is nice. I put $20 worth of gas in it something like 3 weeks ago. Mostly I move it from one side of the street to the other twice a week...and this is the real reason of this post.

Like many city streets, the one on which I live was built before the advent of the auto...it's narrow and not many of the houses have driveways; there are more cars on the street than there are spaces. If you arrive home after 5pm you will most likely not get a parking space. And twice a week--Monday and Thursday at 6pm--we are required to move our cars from one side of the street to the other. If you don't move your vehicle within about 30 minutes of the allotted time it is usually ticketed. Because of this, and the lack of available spaces, many of us--including myself--have begun moving our vehicles a little early. I also do this because I am often at the health club at 6pm, or ticket time.

At any rate, this past week I moved my vehicle from one side of the street to the other about a half hour early so I would get a spot and so I wouldn't forget; about half the others on the street did the same. Well low and behold I went out later and found the above ticket on my windshield. When I looked down the street I could see half  the other vehicles had tickets as well.

This same night I had to put gas in the vehicle...it was, in fact, the first time I used it in a week.

Now I know that some of you will probably ask me why I don't, or even suggest, that I sell the vehicle and go entirely car free. And all I can say is that for reasons I'd rather not disclose in such a public forum I am unable to go entirely car-free at present...but in the future, maybe a year or two, I probably will. But then again by that time we all may be without cars when there is no more petrol (click here).

This evening I am catering a dinner two miles from my house and I'll ride to it on one of my bikes. It's a beautiful fall day and the thought of getting behind the wheel of my vehicle would just be silly. And when I finish for the evening, and after the stress and hustle-and-bustle of the kitchen are behind me, I'll hop on my bike and pedal home in the cool and crisp fall night. The feeling of freedom and freshness of the air I'll experience is something I would not receive if I hopped in a car.

The below graphic was found here (click it for a closer view). To read more about the costs of car ownership--overt and hidden--click here, here, here, or here. 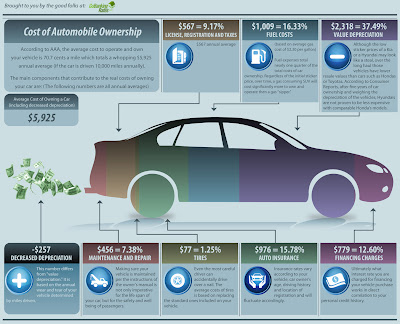 Now back to my online duplicate bridge game. I must be middle aged.

Debor said…
I just have to ask what the rationale is for having to move the cars - especially in such a limited window of time.
November 14, 2010 at 12:43 PM

the_big_smile said…
Happy Birthday, Joe!
No, I didn't know, we share the same birthday.
And I think, we are about the same age...
And we ride the same bike. ;-)

But I am sure, you are the better cook...

So now, on we go into the next year of our life!

I remember an american film, where there was one scene, where they showed, how all the cars were moved to the other side at once. Looked very funny.
I think, this is necessary to keep people busy and to keep them from thinking about the sense in their lives.

Joe is right that these parking ordinances discourage 'car light' use and ownership -- he's penalized for not using his car!
November 14, 2010 at 7:10 PM

Joe said…
Another reason the cars are required to move, and I think this is a good and legitimate one, is so snow plows are able to clear both sides of the street during the winter...but the rest of the year, like now when there is no snow, it has little relevance.
November 14, 2010 at 9:02 PM

Dr C. said…
Is there somewhere a little further away from your house where you could keep the car without having to move it (often). You'd still have the security of owning the car but it would make not using it more convenient, and you could use the folding bike to get to your new parking spot a bit sooner.