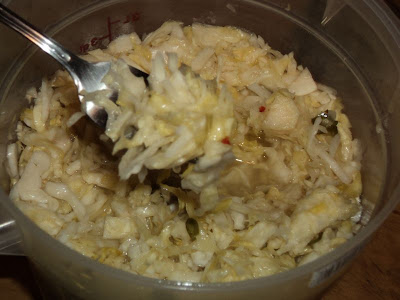 This post is a follow-up to one I wrote a couple weeks ago (click here to read the original). If you're a reader of this blog you already know that I have a fascination with fermented foods (among other things), and sauerkraut is not only the most obvious of these but probably the most common. I've made sauerkraut many times before but what is unusual about this particular batch is that it was made with kraut that I grew myself...it went from the ground to the fermenting bucket within 30 minutes. Anyhow, and to cut-to-the chase...the current batch of sauerkraut (with hot peppers) is ready and geeze 'o man is it delicious.
When eaten raw fermented foods are akin to a wonder drug...they are the best natural pro-biotic on the market. Now some (many) may shriek at the thought of eating raw sauerkraut, but I'm not talking about supermarket-bought canned or jarred cabbage...this is the real deal; we're talking about two different things. Fresh sauerkraut is so easy to make at home but you could also buy it at a food co-op or health food store (at exorbitant prices). Simply said, when you eat raw fermented foods you are eating live foods...it has an efflorescence on the tongue and--when made correctly--a flavor that will keep you coming back for more.
The house in which I live was built, to the best that I can figure, during or before the American Civil War. According to the deed to the house the first few owners had German surnames. During this time there was of course no central heat, electricity, refrigeration, or plumbing. The house is also built on a teeny basement that is now mostly occupied by a steam boiler and octopus-like pipes; it's original purpose, I'm sure, was a root cellar. It would probably be a fair bet to think that during those times there often bubble crocks of kraut in the basement, which of course is how they would preserve vegetables back then.
I thought of this as I ate some of the kraut with my dinner tonight, and I knew the original owners of this house would approve.
To read more about fermented foods and their health benefits, or for additional recipes, click here.
German-Style Sauerkraut
1 small head of cabbage
2 tablespoons kosher salt
Remove the outer leaves of the cabbage and cut the head in half and then quarters. Cut out the core and discard it. Slice the cabbage as thin as you are able and put it in a large bowl. Sprinkle with two or three tablespoons salt and mix. Taste the cabbage; it should taste salty but not overly so. Transfer the cabbage to a container that is wide enough to fit a few small plates. Press the cabbage down with your hands and weight it with plates. Cover the container and leave at room temperature. After a day the cabbage should have released enough of its own liquid that it is submerged, if not, add enough salted water to cover the cabbage. After 2 or 3 days small bubbles will appear, after about a week or so it will begin to smell and taste distinctively sour. Depending on the temperature of your kitchen the cabbage will take between one and three weeks to sour completely. Taste it as often as you like and when the flavor is to your liking transfer the container to the refrigerator to slow its fermentation.
Email Post

After I read your last post about Sauerkraut, I wanted to try to do this.

And after this I post, today I bought a cabbage and started.

One funny thought appeared in my head, when I prepared the cabbage:
I have to read on a blog of an american blogger how to make german Sauerkraut to try to make it. ;-)
November 17, 2010 at 5:25 PM

Joe said…
Stefan,
That is sort of funny. But all cultures have some sort of sour fermented foods but the German kraut is the most popular.

Or this guy's book...here's his site (which also has tons of info on it).