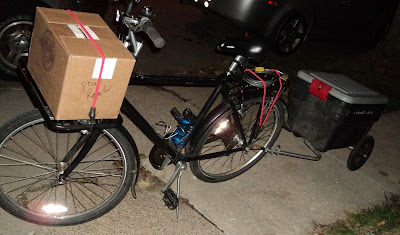 More than $100 in groceries from two separate stores in a Bike Rev trailer and a cardboard box on a front rack.

First Thought
It was cold tonight...the first really cold night of the year, hovering around freezing. But in a month or so when it is really, really cold--when it hurts--I'll be dreaming of a night like this.

Second Thought
As I was checking out at the second store tonight I mentioned to the clerk that I didn't want any bags, and he looked at me and my items I was about to purchase, "You don't want any bags for all that stuff?" No, I told him, I'll carry these (store-owned) baskets out, load my bike, and bring the baskets back in. "You're on a bike?" he says with wide eyes. My thought, and almost my initial response, was...aren't you people used to me by now...I do this at east once a week? But I simply said, I have a trailer. This seemed to suffice him...but then he started to load the groceries into plastic bags. Umm...no bags, remember, I gently reminded him. "Sorry Mister, not many people carry their stuff out of the store like this."

Third Thought
I've owned the Bike Rev trailer for about 5 years but don't use it that often since purchasing the Mundo.  (I recommend this trailer if you're in the market for one; it attaches/detaches very simply and it works really well.) But since having the Bread Platform I felt like putting this bike to the test. The trailer is really handy in that you can have multiple hitches on separate bikes, and it's great during foul weather...your cargo stays dry even if you don't. But I have to say that fully loaded the Mundo still handles better; when the trailer is full I am aware that I am pulling a trailer, but when the Mundo is loaded it rides the same as if it were empty (unless, of course it is a really heavy or bulky load). I am, though, trying to figure out how to attach a hitch to the Mundo just for fun...the way the bike is designed the sidebars would get in the way of the trailer.

Fourth and Final Thought for this Post
Hauling stuff by bike is really fun...and really easy to do. But the bikers reading this blog already know that. And if you are a skeptic saying..."well he has all that fancy bike stuff" (or something along those lines). My response is that you don't need any fancy bike stuff---just a bike you enjoy riding--but it does help. And while it may seem financially exorbitant or a luxury to some...the Mundo is the equivalent of something like two or three car payments, and the trailer is one or two. And as I always say...it's way more fun.

On the Mundo the only place for a hitch is the rear support of the sideloader.
See here:
http://yuba-mundo.blogspot.com/2010/04/anhangerkupplung.html

And for pictures of the Mundo with trailer:
http://yuba-mundo.blogspot.com/2010/04/18-gang-option-die-dritte.html

When attaching a hitch to the sideloader, keep in mind, the hitch should he high enough over the sideloader and you have to take care, to tilt the bike to the left when u-turning left.

But it works perfectly. I use this construction every day for my Chariot.

For your V3 Mundo you would have to find a way, to attach the hitch a different way. The V3, as you surely know has a different sideloader support than the V1 an V2.
November 25, 2010 at 2:33 AM

You should allways keep in mind the weight limit of 300 kg for the Mundo with rider and load.
This limit also includes the weight of a trailer with load.

Joe said…
Thanks guys, for your comments.

Stefan, thanks to for the links to your site...awesome photos. The problem I have with the hitch is not only the bike's frame but the hitch itself...it uses a high-pressure quick-release hose connector...it works great with their custom hitches but I'm still trying to figure out how to attach it to the Mundo.
November 26, 2010 at 3:42 PM