Thoughts on the New Bread Platform (or luggage carrier) 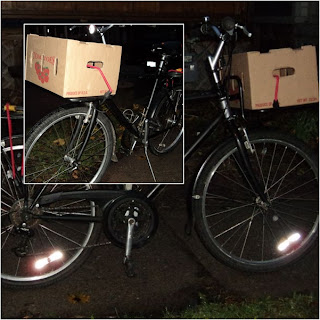 I've ridden the Mule with the new Bread Platform attached for the past week or so (not exclusively because I'm still riding the Mundo), and my overall impressions very favorable. It was very easy to install, it's sturdy, and it is large...really large for a front rack. It measures 12 inches (30cm) by 17 inches (43cm). This will not replace the Mundo of course (nor did I intend it to) but it will come in really handy during the winter or when I simply don't need 7 feet (2.13m) of bike...but the Mundo is still more comfortable to ride. The mule is pictured above carrying a cardboard case of tomatoes (nearly empty)...the size fits perfectly. So does the size of a full case of beer or a case of wine (were talkin' the important stuff here). It handles really well because the load does not turn with the front wheel. But this in itself took some getting used to...it's an odd sensation at first to turn the front wheel and the load (or even just the rack if it is empty) does not turn. It's difficult to describe other than at first it felt like the load was going in the opposite direction because it juts out as you turn...simply an optical illusion.

My only real complaint about this rack is that the bars on it are far apart...nearly 4 inches (10cm) apart. This fine if carrying a box or crate, but with single or loose items this may present a problem. I'm currently thinking about how I can rectify this with modification (I may attach thin wooden slats going in the opposite direction, creating a sort of bed for items). I'd be interested to hear what others have to say about this, whether it's this rack in particular or another. 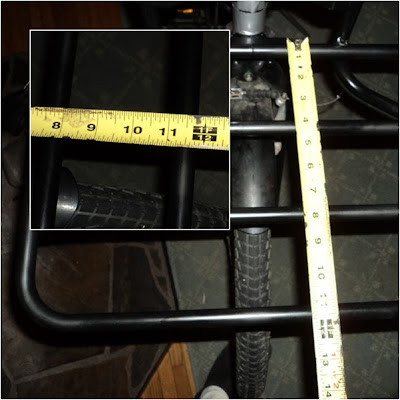 Now here's something on a slightly different note but still pertaining to the rack. While Mundo sells this rack as their Bread Platform (and what I thought may be a product built exclusively for the Mundo), it is actually a rack built by a Dutch company called Steco, and it's a rack built to fit most bikes. This was an easy assessment to make once I looked at the directions that came with the rack (click the image below). After Googling the rack and the company that makes it I found that many people sell this (but mostly in the EU), and Mundo is the only company that calls it as a Bread Platform, most call it a Luggage Carrier. None-the-less, I am very thankful that Ben and the Good People at Yuba are selling this rack (smart marketing on their part). I'm mentioning this because I think more bikes (longtails or not) should have racks like this. It turns an ordinary bike into one that can carry stuff. But the real problem, I think is getting them (the racks)...we need more American bike shops selling accessories like this (maybe when the fixie fad wears off). Thanks again Ben (and Yuba) for offering such a fine and useful product. 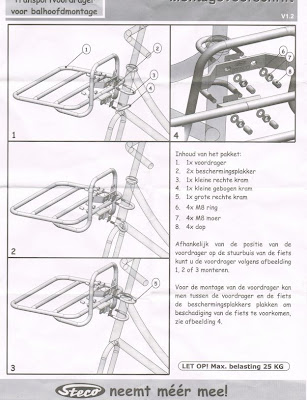 I am glad to see that the rack is working for you. I have been thinking of getting another rack for my hybrid bike.

It is basically the same as your mule.

Joe said…
Dan, Thanks again for send the pics of yours...it was the deciding factor in me purchasing one. I'm also thinking about purchasing a second one--for my Mundo--but it will probably have to wait until after the holidays.
November 23, 2010 at 9:38 PM