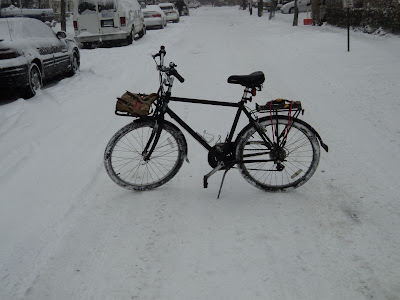 Well the snow has finally hit and it seems a bit early this year, at least for this type of snow. This is actually the second heavy snow of the season. The most recent was just a few days ago which was classic lake effect. If you are not from this area of the world you may not be familiar with the term but lake effect snow hits suddenly and heavy, and often in distinct bands (the photo in the previous post was just taken yesterday and the pavement was dry). In lesser amounts this is sometimes called a snow squall. An area can be pelted with snow while a couple miles away it may be clear. This was the case the other day when the area just south of Buffalo received 3 feet of snow but the city center only had a few inches. The picture below is an aerial view of the snow coming in off Lake Erie last week. I personally have never seen this look so dramatic; most likely it was shot from an airplane. But you can see the intensity of it. Unfortunately I do not know the author of the picture to give credit where credit is due. I downloaded it from Facebook, where it was shared and copied, etc. We actually only received about 7 or 8 inches today but we are supposed to get more tonight. Our city has been famous for snow for more than a century apparently but it really made the spotlight during the never forgettable Blizzard of '77. I was 16 at the time and had a blast (we could literally walk up a snow bank onto the roof of our house). At any rate, the snow made for a slow-go today on the bike. The picture above was when I arrived home from work. The snow was not too deep so it wasn't too bad riding, but when the roads are not plowed I am more worried about the motorists than I am staying on my bike. So tonight when I went to the health club I actually drove my truck...I may be crazy but I'm not stupid. The roads should be better tomorrow.