A Scary Intersection, a few Geese Flying South, and a Winter Cycling Epihany 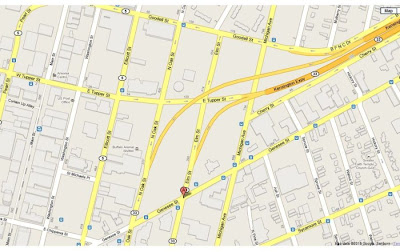 People often ask me if I'm not scared to ride on the streets [with cars], especially during the winter. No, is usually my answer. But I'll add this: I don't get scared on a bike in traffic very often but today I was. I had to run an errand after work and found myself on the cusp of Buffalo's East Side. Buffalo is a small city but I don't venture to the east side on a bike very often, thus I wasn't sure which was my best route. At any rate I found myself on the corner of Elm and Genesee Streets facing north (red dot on the map above..click to enlarge). I was heading up two blocks to make a left at Goodell, but the problem was that the entrance to route 33 (the Kensington Expressway) is right there. The speed limit on Elm is 30mph (48km/h) but the speed limit on the expressway is 60mph (96km/h). Well you probably wouldn't notice it unless you were on foot or on a bike how fast the cars were barreling down Elm street, basically using it as an on-ramp for the expressway. And to go north I had to traverse the actual on ramp; cars veered right at 60mph (or more) directly into my path to speed onto the expressway. No one slowed; they just honked. It took 3 traffic signal changes before I saw a long enough break in traffic to make a go for it. What a sight it must have been...an overly dressed (for the cold) middle-aged guy pedaling like hell with an army of traffic behind him, just to make it past the on-ramp of an expressway.

I've mention many times how bicycling for me is beyond the physical at times, the same way meditative walking can be or also lap swimming. Speaking specifically about biking it's about being outside on a crisp winter's day; it was cold outside today, but other than my fingers I was sweating (I really do need to get better gloves). As I huffed and puffed against the cold wind riding my 40lb (18k) bike it felt good; I was getting a physical workout, saving petrol (and maybe a little bit of the planet), and with the winter sun just about to set I felt alive. And as I stood waiting for a break in traffic, and watched cars zip by (mostly with one person in each vehicle), I was truly glad that I was standing on that corner gripping my handlebars instead of a steering wheel. But I was, in fact, standing in a bicycle wasteland, there was not another bicycle or pedestrian within view.

As I was resting and waiting for the right moment to push off into traffic--I had my right foot poised on the pedal--I looked up and saw a v-formation of geese flying south directly over the city. After a crazy-busy day at work I just stood for a few moments and watched them...they looked beautiful, peaceful; and I wondered what it must be like to be up there with them. Then (and not to sound too hokey) a feeling of peace came over me and I knew that I had nothing to worry about because I had and always will have everything I need. As this thought came to me I glanced over my shoulder and saw the break in traffic, and I pushed hard on my right pedal...

“Therefore I tell you, do not worry about your life, what you will eat or drink; or about your body, what you will wear. Is not life more than food, and the body more than clothes?  Look at the birds of the air; they do not sow or reap or store away in barns, and yet your heavenly Father feeds them. Are you not much more valuable than they? Can any one of you by worrying add a single hour to your life?"     Matthew 6:25-27 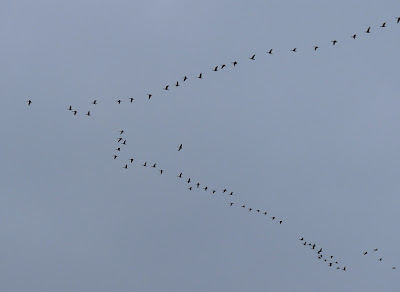 This photo was found at WiseAcre Gardens.
Email Post

James D. Schwartz said…
That does sound scary Joe! Glad you made it out unscathed.

Speaking of geese, I was walking the dog tonight and saw hundreds of them presumably gathering to prepare to fly down south. It was interesting to see them all together in one place in Lake Ontario.
December 8, 2010 at 12:08 AM

Door to Bangalore said…
Thank you for the reminder Joe. It is so easy to get caught up in the panic of the world around us and forget that this world is not our home and the trappings of this world are merely that.

Jesse Smith said…
I generally like winter riding too, but the unplowed/unsalted streets are a real challenge. And I had a scary spill yesterday night coming home from work. I took a corner too fast and my back wheel slid out in the snow and I went down on my right side. I wasn't hurt too much, but all I could think of was some crazy driver barreling around the corner after me, not seeing me on the ground, and running me over.

I really need to get some reflective tape for my dark jacket, since it's already quite dark when I leave work, and there are no street lights on many of the suburban streets that I commute home on.
December 8, 2010 at 8:59 AM

When I read about the geese, I thought, it must look funny to them, seeing us down here and rushing to earn some fancy colourfull printed peaces of paper. (And think of some more funny things, we do with money. ;-) )

And yes, we should never worry about our future. Everything will work out anyway.
The future might become hard, but it will will helpfull for us human beings to find our way to true humanity.

Joe said…
James, Toronto is due north of Buffalo...maybe the geese you saw on the lake were those that I saw flying over head :) And as usual, I enjoy your blog posts @ The Urban Country.

Travis and Michelle, Thanks for your kind comments...glad to hear your in India (sounds exciting), but sorry to hear you are no longer in Bflo.

Jesse, I've been in the same position--almost happened to me last week. I've learned to take it easy. I also find that when I hit a particularly slippery spot or one with loose snow, I coast and put as much weight as I can on my front tire.

tasteofbeirut said…
That photo caught my eye! Thanks for sharing this moment and the verse; I saw a formation of pelicans in Lebanon, which amazed me, since people had scared them off for the longest time (by shooting at them); it is also amazing to see people bike riding in beirut, the scariest city to drive in, let alone bike! yet some do brave the traffic and the wacko drivers. I prefer to get my meditation through swimming!
December 8, 2010 at 11:25 PM