A Starry Night, a Minor Confession, and Bicycle Therapy 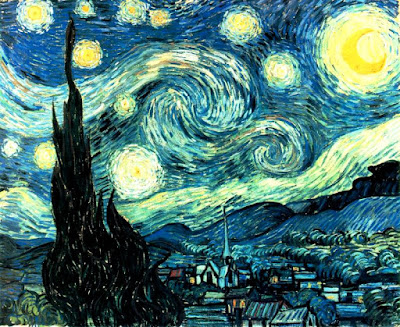 The Starry Night by Vincent van Gough.
The past four days I've had off of work; today was my first day back. And being the holiday weekend I had family obligations and barely used my bike(s)...much to my chagrin I mostly drove these past four days. Come to think of it I was barely out in the open air in the past four days...and after a while this subconsciously starts to get to me. Mostly, the only time I was outside was to either walk from my truck to the house or vice-versa....I realize this is common to many but it's not a lifestyle I enjoy. I need to be outside...even though I live in the city being out of doors is really good for my psyche (I did use my bike some this past weekend, but not nearly as much as I'd like...and I did ride the short distance to-and-from work today). Anyhow, it's interesting how your actual mindset can change after using a car so frequently (it's a slippery slope); I had to move my vehicle from one side of the street to the other tonight because of alternate parking, and I thought about driving to the health club (about 1.25 miles away) simply because I was feeling lazy. But after thinking about it briefly I locked the truck and hopped on my bike...and was so glad I did.

It was not particularly cold out tonight (about 25F, which nothing compared to recent temps), nor was it particularly starry (as the blog heading suggests); it was rather overcast. But the fresh air and wind on my face felt invigorating...especially on the way home being fresh from the steam room. And as I pedaled and coasted (slowly) the old 70's song, Starry, Starry Night, by Don Mclean rang in my head. It was, without trying to sound too hokey, a therapeutic ride. Speaking solely for myself, being outside and getting physical exercise can really be mood altering. So the next time I'm feeling a bit sluggish, or have a bit of cabin fever, I think I'll take my own advice and go for a bike ride (or walk if the snow is too deep). 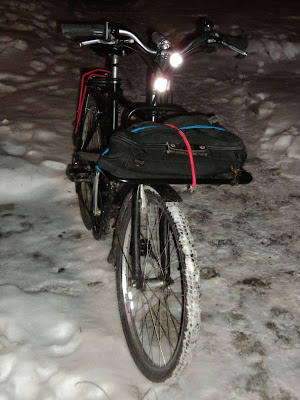 the_big_smile said…
Yes, Joe! Bicycling can really be therapy! I had this experience 15 years ago, when I was really down and started to cycle again after 15 years of almost not cycling.

Dr C. said…
My Christmas plans would usually have been similar, with buses or trains taking the place of the truck. This year my plans were different which led me to cycle quite a bit on Christmas Eve and Boxing Day and even a few km on Christmas Day. I really enjoyed the clear roads and the crisp, clear weather.
December 28, 2010 at 8:22 AM

Sally said…
I can identify with you Joe. The holiday season for me meant a lot more driving to visit family and friends in out of town places. Of course I love the socializing, but driving so much does mean that I don't get the usual exercise and air that I am used to. I will be glad to get back to the "routine" next week! Happy New Year Joe!
December 28, 2010 at 6:43 PM

Joe said…
Thanks everyone, for your kind comments...only fellow cyclists can truly understand the full benefits riding and being out of doors can provide.
December 28, 2010 at 11:39 PM