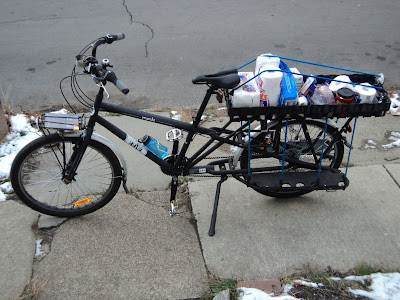 Two plastic crates containing sundries and groceries from two stores.
A box of Nag Champa incense.
A DVD (front rack).
A St. Nicholas gift for my son (obviously I can't reveal that until tomorrow in the event he reads this blog).

This part of the post is an edit, an add-on, because I meant to--but forgot to--relate it earlier when I originally posted it.

Anyhow, as I was in the first store of my evening ride there was a man there returning recyclables for cash...you know the type, not sure if they are homeless but they are definitely "rough around the edges." Now I am in no way trying to sound disparaging towards this man because I have a deep respect for people who can partially support themselves by collecting cans and bottles and I think I am a little rough around the edges myself. And truth be told I really question whether or not I will eventually be collecting cans and bottles to buy flour to bake bread (no joke). At any rate, he was on a bike and we both happened to exit the store at the same time. He saw my bike and was immediately taken by it and struck up a conversation about it...how it would be great to have a bike like that to carry stuff, etc. (I concurred). The bike rack where I had it locked to was at the corner of the building and we talked as I loaded and secured the items. In the middle of our conversation he turns away from me, sort of at the corner of the building, pulls out his penis and begins to urinate against the building...he continued to talk as he urinated. Now I'm all about living simply in the city but in a somewhat more dignified manner. And as I pedaled home I said a silent prayer for that man and hoped for myself that while I really feel it's OK to ride a bike and collect bottles for money at any age, I really hope not to lose touch so much that I urinate on a building in public. 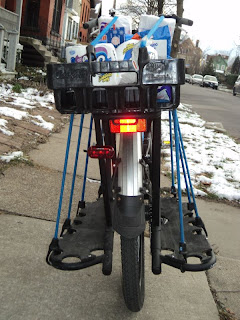