Things That Can Be Carried On A Bike (#248)...and a couple comments 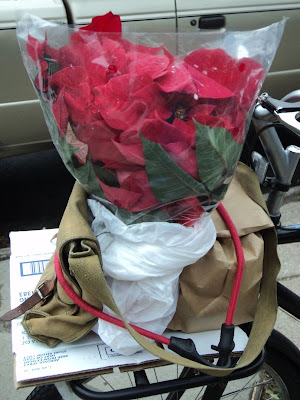 I had planned on riding the Mundo to work this morning, but then heard the weather report calling for lake effect snow. I should know by now not to believe the hype...the news, and many people for that matter, really like to hype the weather and it ends up being just that...hype. At any rate, it snowed a bit, but not much and I could have ridden the Mundo after all. But it's not really a problem as I've been enjoying riding my winter bike again as well.

I've also been enjoying using the new front rack for smaller loads such as this. I've really become accustomed to the fact that the rack doesn't turn when the front wheel does...it really keeps the load, and ultimately the entire bike (and me) more stable. But I'm still having issues with the bars of the rack being so far apart that things can fall through them or at least not sit correctly...not the flattened cardboard box to for an impromptu deck. But of course this is not a problem at all, because if my biggest problem in life is that the bars are too far apart on my front rack I surely do have problems...for every problem there is a solution, and an opportunity for growth. I'll eventually build a wooden deck for it.

As I typed the last sentence there was just a flash of lightening followed by a boom of thunder (it's always a little weird and eerie when it thunders and lightnings during snow; I associate it with rain)...maybe it wasn't hype after all. 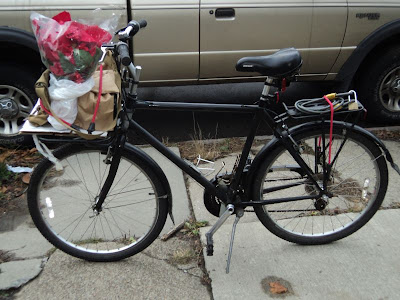