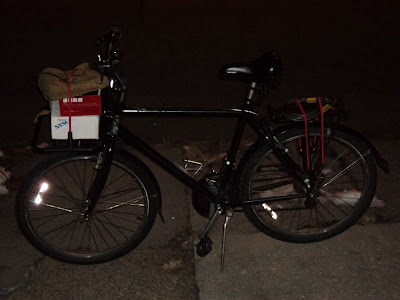 I had a hot and bustling evening at work tonight and really looked forward to hopping on my bike afterwords. Before leaving work I checked the temperature and it said it was 25F (-4C) so I put on an extra sweater and a wool scarf around my neck. And as I walked out the back door with my bike I saw one of the patrons I had just served dinner. They commented on me being on a bike, and asked if I weren't cold. No, I told them, I'd be fine...and I unconsciously added that I own a truck but choose to ride a bike when I can. I don't know why I often add that...it's as if I feel odd that I'm a middle aged guy riding a bike, perpetuating the American stigma (in my head) that if you're not in a car (a really nice, expensive, and big car) then you must not be worth much...or at least can't afford a really nice car.

Before going home I wanted to purchase wine (which I'm drinking as I type these words) but had to go to the ATM first. It was such a beautiful winter night that I chose to go to a different bank rather than the one closest to where I work so I could get a bit of fresh night air.

I will admit that it was a bit cold at first, but that only lasted a minute or so. But even if I was a little chilly, I thought, what's wrong with that? The entire round trip (2 miles) took just a little while; it may have been faster but I was pedaling slower than usual after working all day. What's wrong with being a little chilly in the winter (or sweaty in the summer)? If I would have driven it probably would have taken about the same length of time. OK, maybe a couple minutes would have been shaved off...but I would not have been out in the crisp winter air and gotten a quick invigorating ride in...I would have sat on my car-couch and pressed the gas pedal. After spending an evening facing a hot stove those few minutes on a bike on a chilly winters eve were priceless. So I'll re-answer the question I was asked earlier. No I am not cold as I ride my bike, but even if I am every so often, I don't mind. It reminds me of my surroundings; it makes me feel alive.
Email Post

Pangolin said…
You didn't mention the feeling of being all steamy and warm when you get to your destination after a winters ride and walk into a building. Even a building at 65 degrees feels toasty and welcoming.
December 5, 2010 at 1:36 AM

here in Germany I sometimes get feeling too, to have done something wrong because I don't drive a car, but prefer the bike.

Joe said…
I concur with both you guys in that biking warms you on a cold night!

John in NH said…
It's been running -3 to -8 C here the past couple days. I had my usually 8.5mi rural ride in this morning with a cold west wind. T-shirt, fleece, and heavy winter coat, wool lined knitted (with leather grip) gloves, balaclava +hood of jacket, wool boot socks and my usually boots.

By the time I got into town I had both jackets unzipped with just my t-shirt. Closing into the university I had my hood and balaclava+helmet off my head, plus my gloves.

I was literally wet with sweat this morning, takes the entire class period to dry off, but then its back out again in jackets that have not dried!!

There are a good deal of unstable folks up this way too, many ride bicycles (or bicycle shaped objects). I always say hi or give a wave, or even have a brief conversation. Yes many do very odd and unhygienic things, but they are still folks and mostly friendly :)
December 6, 2010 at 8:04 PM