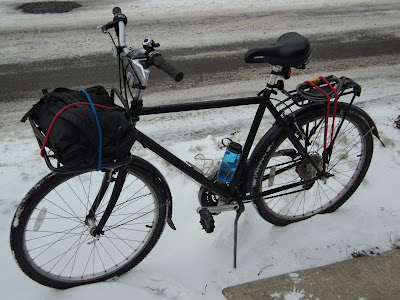 My bikes are heavy...all of them. All have fenders and front-and-rear racks to carry stuff. I don't race, nor do I tour; I ride bikes for transportation and I find heavier bikes to be the most practical. The above is one of my three "everyday bikes," but mostly it's my winter bike. It's an old Trek that I purchased for $40 at a flea market about 4 years ago...since then I've overhauled it and put probably $200 into it. It weighs, at best guess, about 35lbs (16kgs). My other regular bike, which many who read this blog already know as my favorite, is my v3 Mundo; that bike weighs in at about 55lbs (25kgs). The third bike I ride, but not as frequently and rarely in the winter, is my Dahon folder; it's the lightest of the three but it still weighs in at about 25lbs (11kgs). I have always liked heavy bikes because they feel solid and because I like to have accessories, such as fenders and other aforementioned ones, but also lights, water bottles, bells,and even a cup holder. I like my bikes to be rolling self-contained units, capable of carrying what I would in a vehicle and offering a few of it's amenities (but many that an auto could not). Stripped down, bare-bones bikes (especially fixies) are of little interest to me. They may be good for touring, racing, or short sprints, but for my bicycling usage a heavy bike makes more sense. So what, you may ask, prompted this brief but heavy-weight manifesto...an article I recently read on the BBC website. In it an avid cyclist conducted a study as to whether it made a time-difference if he rode his light carbon-framed bicycle to commute to work or his heavier steel-frame bike. His commute was 27 miles and over time he came to the conclusion that the time saved was about one minute. The following is cut-and-paste from the original article in the British Medical Journal:

A 30% reduction in bicycle weight did not reduce commuting time over a distance of 27 miles (43.5 km). A new lightweight bicycle may have many attractions, but if the bicycle is used to commute, a reduction in the weight of the cyclist rather than that of the bicycle may deliver greater benefit and at reduced cost.

This didn't surprise me because even when I have the Mundo fully loaded (once in motion) it's as easy to pedal as if I'm not carrying anything; the same goes for my winter bike (but I did smirk at the comment, a reduction in the weight of the cyclist rather than that of the bicycle may deliver greater benefit) . Distance may be another matter, the same goes for steep grades, but these are not a regular my daily travels.

I'd be interested to hear what others had to say about their bike's weight and how it affects their ride. To read the story at the BBC website, click here; to read the original story in it's full format, click here.
Email Post

Unknown said…
Before buying a Mundo, my daily ride was a 16", lightweight Dahon folder. I actually love the unique riding characteristics of both. The Mundo is a solid and stable cruiser. I like the way it soaks up all the bumps. The Dahon rides like small sports car. Living in a crowded city I appreciate it`s nimbleness and quick-acceleration. I think going 30 kph on the Dahon feels more thrilling than the same speed on the Mundo. Having said that, most of the time I`m not seeking thrills but practicality and a comfortable ride, so I choose to ride the Mundo most of the time.
December 19, 2010 at 9:28 AM

Dr C. said…
The weight obsession is irritating. On a day to day basis I ride a roadster (Raleigh DL-1) and people often ask me if it is not a bit heavy. It weighs more than a carbon fibre racer but it doesn't make any difference for utility riding. It is odd how few people use mudguards and other common sense accessories because of this obsession with weight. The Yuba is heavier but once moving it makes little difference. The same can be said for dynamos; if you are racing competitively it makes a difference, if not having a dynamo makes good sense
December 19, 2010 at 5:23 PM

the_big_smile said…
My Mundo is 38 kilogramms. My Trekking bike is 17,5 kg. Both not estimated but messured!

The difference: The Mundo rides smooth like a big limousine, has slow accelleration, you really feel the weight uphill and downhill the weight makes the bike noticable faster.
The trekking bike rides more like a sports car. Fast accellaration, easier climbing.

Considered my own weight of 92 kg it makes sense to reduce my own weight instead of searching for ways to spend lots of Euros on reducing the weight of the bike by 500 gr or so.
And I never want to ride without mudguards or a rack. And weight reduction by not having suffient light is really dangerous! So I need a dynamo and the rest of the lighting. I could think of more comfortable wasy to die, than beeing hit by a car, because I ride without light.

Joe said…
Thanks guys for your comments. It's interesting how all of us ride Mundos...I find once I'm moving on that bike the momentum is something to be reckoned with. Also, a couple of you mentioned having dynamo light systems (which we'd call generators in the States). They are not that common in the States. I currently have battery operated lights but do not really care for them; I'm thinking about getting a generator set. Any comments? Brands. Do you find they slow you down? Thanks. (James, nice blog, btw.)
December 20, 2010 at 9:52 PM

the_big_smile said…
Joe, I have a Shimano hub-generator (Now using the right word. ;-) ) in my trekking bike. With this I can feel a slight rsestance when the lights are burning.
But I had my first generator hub ruined after 15000 km. A bearing was worn and you can't replace these bearings. Shimano does not sell cones that fit.

In the Mundo I use a S.O.N. (http://www.nabendynamo.de/english/index.html) I don't feel anything, when light light up. (They light up automaticly when it gets dark on both bikes.) I heared, these hub last for more than 50000 (Yes, I mean fiftythousand!) kilometers. That not a statement of the manufacturer, but from users. And if a bearing gets worn, it can be repaced. But unfortunately only in Tübingen, Germany at Firma Schmidt Maschinenbau.
The biggest downside on the S.O.N. generator is the price: I paid 160 Euro for the hub without spokes and rim.
I bought two weeks later a complete new wheel with shimano generator for the trekking bike for 80 Euro.