2 Bikes, 2 Short Rides, a Snowy Day, and a Change in Road Conditions 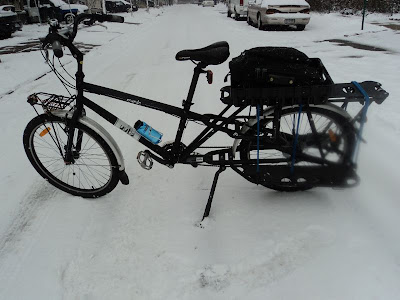 This has been a very odd winter in this region...the month of December was frigid and snowy, then it warmed up. Around new years it rained for three days and all the snow melted, and now it's cold and snowy again. I've been riding the Mundo regularly again because of the lack of snow and when I woke to a blanket of new snow this morning I took it out to run a couple errands. Earlier in the day it was somewhat warm (32F/0C) so the snow was heavy. The Mundo handled well...with it's heavy weight and low gear ratio (or is it high gear ratio? I always get that confused) I plowed right through it. Then this evening I had an appointment to keep and choose to ride my winter bike. I still have not purchased studded tires but that bike handles better in icy conditions (or maybe, because of it's shorter wheel base and lighter weight it's just easier for me to control). Anyhow, the snow that was heavy, wet, and slushy earlier in the day began to freeze by nightfall...the streets were a sheet of ice. I took mostly side streets to avoid traffic and went slowly. There were a couple points when I felt the bike slide a little underneath me (because of my own over-confidence), and it would bring me back to the reality that I was in motion on two wheels on ice. Other then those couple short rides today I had not left the house, nor did I seem to accomplish anything on my personal to-do list (one of those days), and as I slowly and precariously pedaled and coasted home tonight I couldn't help but think how good it felt to be out in the open air on such a crisp winter's night. 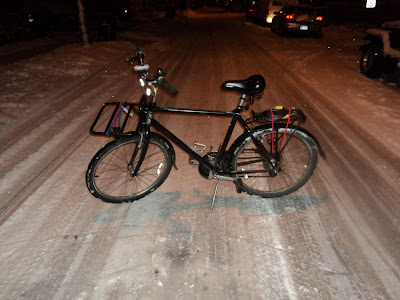