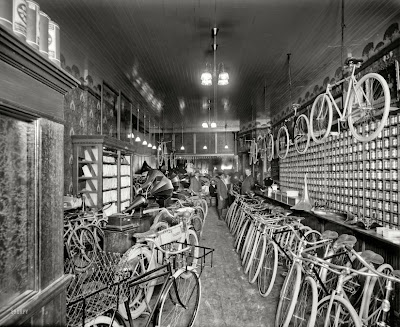 Photo found at Shorpy.com
This is a photo of a bike shop in Detroit, Michigan. I find a couple things interesting about it. One is that Detroit, as most people know, became so synonymous with the automobile at one time that it became known as the Motor City. This photo was taken in 1912 and is around the time that Henry Ford began making his famous Model T, which was the springboard for his later models (and we all know that the original car mechanics were former bicycle mechanics)...I wonder how long the bike shop lasted with the advent of the automobile at the time. But the other thing that I find interesting, and this is more on a personal note, is the very first bike pictured in the lower left....a 1912 cargo bike. Nice.
Email Post