Comments on the cold...and a few other things. 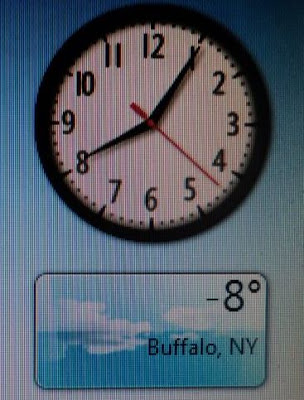 This is almost a continuation of a post I wrote a few days ago regarding the pattern of crazy weather we're having this year...it snows, then turns frigid cold, then it warms up, things start to melt, then it turns cold again and things freeze rock-solid, then it snows...you get the picture. Anyhow, the above photo is a screen shot of my desktop just before I left for work this morning. I can't remember the last time it was -8F (-22C). As I've mentioned before I live relatively close to work (less than a mile) so rather than deal with the extra windchill created on a bike I chose to bundle up and walk. Firstly I'll say that it was truly beautiful..it was bright and sunny and there was nary a breeze. But geeze o' man was it cold. My nostrils were freezing and I found myself coughing at the intake of such arctic air; wrapping a scarf around my face solved the problem. And the intense cold seemed to intensify things. I'm an observer by nature and I tend to over analyze things, but it was incredible. As I walked the snow squeaked, and the steam from houses and car exhaust just seemed to hover in the air, and as people passed me I could hear not only the sound of their feet squeaking in the snow, but also their breath. For lack of better terms, and not to sound too hokey, it was almost mystical; it was beautiful (but I was glad when I arrived at work and the radiators were already at full capacity). Throughout the day the temperatures warmed some...we had a balmy high of 19F (-7C) and it's about 18F as I type these words. Anyhow, for various reasons (partly because of the cold, but also because of other personal obligations) I have not been on a bike in about about 3 days (a long time for me). After work I had to drive somewhere and was going to go to the health club. I was in the truck so I thought I would stop (it was on the way). I usually ride a bike there and am always glad because the parking lot (for cars) is about three-times to small. As usual when I arrived it was packed and cars were circling looking for a spot...this time I was in one of those cars. Feeling frustrated I said to myself aloud, almost chanted...I should be on a bike. Because if I were on a bike I wouldn't be circling I'd be locking my bike to the post next to the door where I usually do. Then later, after returning home, parking the truck and having a quick dinner, I had a meeting at church I wanted to attend. I looked outside and the street was about 3 inches deep of un-plowed snow but I thought there is no way I am not riding a bike. My route to church is mostly side-streets plus one back alley/long driveway...in short, not main roads that are dry and plowed. It was challenging to say the least but it felt so good to be on a bike. It's interesting how people often ask if I'm not scared to be on a bike in the snow...but on my ride to and from church this evening I felt more in control than I have in the past three days of driving (and I consciously use the word control as metaphor for many things in my life). On the way home there is one point where I ride up a slow and gradual incline, and in nicer weather I always relish this because it's a nice but brief workout. Tonight, because of the snow and cold, it gave me a sense of accomplishment and an extra-hard workout. I will not lie and say that I was warm the entire way home--because I surely wasn't--and that it was an entirely easy ride--because this wasn't either--but being out in the elements, even in the city, is so invigorating to me...in a way that sitting on a car-couch and pressing a gas pedal can never be. And walking to work in sub-zero temperatures or riding home at night in just slightly warmer temps makes me thankful for the changes in weather, that I have the opportunity to feel the sweltering heat of August but also the frigid cold of January. It makes me feel good...it makes me feel fully alive. And that, I think, is a good feeling to have. 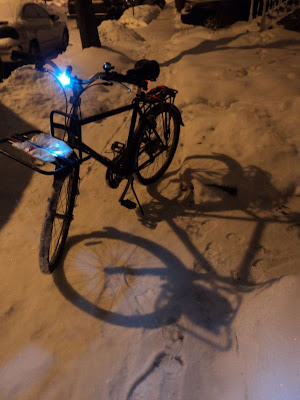