This is a bit of a rant, but first I have to say that at times I feel I am a bit of an oxymoron...or at least a paradox. I say this because I attempt to espouse a simpler way of living in the city through this blog but at the same time I record it on a computer via the Internet...to live truly simply would be to get rid of my computer, kindle, and netbook and just write and read books instead (which I sometimes fantasize about doing). Ahh...but living in the times that we do I--like many--have come to rely on electronics for day-to-day tasks and entertainment (one can only wonder what some of the great writers would have produced if they had access to a computer with spell-check and the internet...maybe they would have ended up simply surfing the net and not writing at all...a little self-analysis I suppose). Anyhow, I'm getting off topic and am jumping ahead of myself...I'll continue with the rant.

About a year-and-a-half ago I purchased a netbook that was on sale...only paid a couple hundred dollars for it...and it is a "quality" name brand. I use it occasionally, but not that often. I had the day off today (which is unusual for me on a weekday) and had an article to write so I thought I'd take my netbook to a local coffee shop to work. But when I turned it on I got the above message. That in itself isn't that odd...one sees these messages on occasion. But no matter how many times I did a disk check or scanned it it would simply repeat itself...never fully booting up, not allowing any sort of safe mode or other over ride.. After doing some of my own research, via Google (on my desktop), I found that it may be that the hard drive has malfunctioned. I phoned a tech person who I trust and he agreed it may be the hard drive. I'll take it to him tomorrow to find out for sure. He also said that he'll be honest with me and say that if it is the hard drive it may not be worth it to have the work done...that with the parts and labor it would cost almost the same amount just to replace the entire machine.

What? It's only 18 months old. Sad but true, he added. He'll take my money (to repair it) if I want him to, he also added, but he's just being honest.

This is the story of our "modern" society I suppose...rather than fix it, throw it in the trash and replace it. But what most of us (including myself) have never seen are one of the countless electronic dumps that dot our precious earth. So I'll find out the prognosis in a day or two and then have a moral and financial dilemma to contend with...do I, being a single dad living week-to-week, spend the extra cash to repair this or just discard it? But I am jumping ahead again...if it is expensive to fix I do know that I will not replace it, probably donate it to someone who wants to repair it. But geeze 'o man does this get my goat...it's almost brand new. Thankfully I do not have any data on it that is not backed up on my desktop (and yes, Sean, this taught me a lesson...I'm getting an external hard drive to back up my desktop). Whatever happened to producing things that are built to last...but then again if things lasted we wouldn't be able to be a consumeristic society (and yes, my tongue is firmly planted in my cheek).

If you want to read about the problem with cheaply made electronic trash and how it is filling our landfills, click here. If you are still interested here's a good video (20 minutes) called The Story of Stuff. 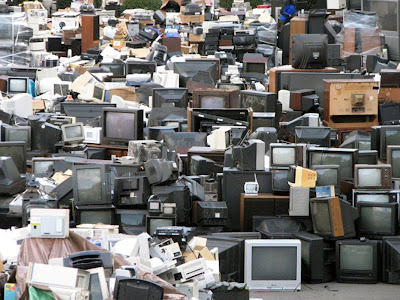 Nina Suluh said…
The sad thing about consumer electronics is that because technology moves ahead so darn quickly, components become obsolete faster. We're in a similar place with our kids' PC. The parts to upgrade it are more expensive than newer parts because the technology is older and the parts are harder to find.

If you find you don't want to repair it or replace it, perhaps donating it to a computer tech training facility might be a good idea? If there's such a place, then it would be beneficial to the students to learn how to fix it.
January 4, 2011 at 12:14 PM

Jasioni said…
You should try revitalising you'r old machines using linux, there are several distro's that run great on older hardware, try puppy,lubuntu,antix or salix os, just a few. you can get a new hard drive of ebay for very little 320gb is about £35 don't know what that is in dollars tho. Love your blog, Jay.
January 4, 2011 at 2:30 PM

Joe said…
Thanks for your suggestions llama and Jay. I haven't taken it to "the guy" yet (tomorrow most likely) so we'll see what happens. If it is crap I probably will donate it to someone(after I remove the said hard drive). Jay, the problem with replacing the hard drive on this is that it is a netbook (opposed to a laptop or desktop)...speaking with another person today they told me that the 160 gig hard drive is a mere 2 inches square and 1/4 inch thick. It only makes sense that the smaller these things get the more complicated (and unreliable) they get as well.
January 4, 2011 at 10:50 PM

Premodern Bloke said…
I highly recommend listening to this episode of Fresh Air.