Things That Can Be Carried On A Bike (#259), a Few Comments on Winter Biking, and a Scary Incident. 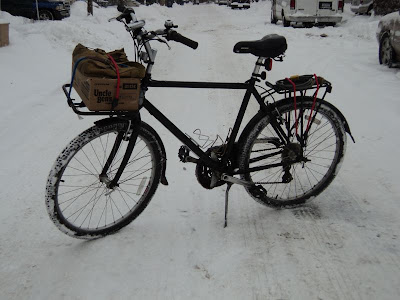 Things That Can Be Carried On A Bike (#259):
A canvas bag carry an actual book and a virtual book (kindle), a day planner, and various writing implements. Also, a cardboard box containing a foil container with chicken scraps (for the pugs), a jar of peanut butter and a jar of grape jelly (PB & J on whole wheat bread is my favorite breakfast).

A Few Comments on Winter Biking:
Sometimes I think people my age (middle age) think I'm a bit nuts riding a bike as a preferred form of transport even in fair weather, but when it begins to turn cold I believe some think I'm out-and-out bonkers. I often hear things like: You rode your bike today? (their voice raising an octave at the end, emphasizing it as a question). And when it's really cold and snowy, such as it is today, it sounds more like: You rode your bike today! Emphasizing the word today, almost exclaiming it. Well, the truth is that I still prefer to ride my bike when I'm able...even on a day like today. But then again I'm probably preaching to the choir if you're reading this. And there are plenty of people who do this, click here, here, here, or here, for a few examples. I'm often asked by non-cyclists if I'm not afraid to ride in the snow. No, I tell them, that it's fun, but I do ride differently and take certain precautions. Then I'll ask them a question: Don't you drive your car differently and take certain precautions when it's snowy? This is sometimes returned with a smile or blank stare. Besides being keenly aware of the road conditions directly under my tires and the car traffic around me, I ride much slower, brake less (or not at all if it is icy), and if I hit a shiny ice patch or the snow is deep (over the rim of my tire) I stand and put most of my weight on my handlebars (and ultimately the front tire) for better steering. So in retrospect, and to answer the question posed above, no I am not afraid to ride in the snow...but I am a little bit afraid of the people in cars (that do not change their driving habits in the snow) and are on the same roads as me. This bring me to the next topic.

A Scary Incident
This evening as I was heading to the health club and I took my usual route, which entails going down Allen Street; I've posted about biking down this street before. According to the Allentown Association, Allen Street began as a cow path (I've heard this story elsewhere, too) and that the village sort of became built around it. This makes sense to me because the street is so narrow; it's also very crowded with parking on both sides. It's so narrow--too narrow for today's vehicles--that often one vehicle has to pull aside a bit to allow the other to pass...but this still doesn't stop some people from speeding. Anyhow, it is because of the street's narrowness and congested-ness that I actually like to bike down it...it is sometimes more efficient to be on a bike than in a car; a bike can keep up with traffic at an easy pace, even when riding in the middle of the lane. Anyhow, tonight was a little dicey...the roads were icy but at the same time I was encountering patches of two-inch deep slush patches where I would feel unstable on two wheels. It was during rush hour and there was traffic in both lanes going in both directions. In short, if the bike were to slide out from under me there would be nowhere safe to land. And just as I was thinking I should move onto the sidewalk (pavements to my EU readers) at the next side-street entrance I hear a sound directly behind me like scraaape followed by a ripping clunky sound. At this point I was on the corner of Allen and Park and immediately pulled over (almost dove off the bike)...the car that was behind me (the one in question) kept going like it was nobodies business; he had sideswiped a parked car. Walking my bike back I could see a large scratch down the entire side of the vehicle, the door handle and side mirror were non-existent, and because (I'm assuming) the passing car's rear bumper caught the front bumper of the parked car, the entire front bumper of the parked car (and it's cowl) lay in the street. Another car pulled over to survey the damage; both of us in disbelief. No one knew whose car it was. I rode on the sidewalk the rest of the way to the health club and the entire way home.

About an hour later as I pedaled home I saw there were people around the damaged car; it seemed to be a father and daughter. I told the man, who was loading the broken parts into the trunk, what I saw; he was livid. Someone, he told me, left a phone number on the windshield; they may have some info about the accident. I hope so. While we were talking he looks at my bike then motions his hand to the snow as he's talking and says, you'd better be careful on that thing (my bike), this stuff (the snow) will kill you. I will be fine I told him, that I'm riding on the sidewalk, but what I didn't tell him was what I really thought: It's not the snow itself that could be my demise, but it could be someone like the person driving the car that hit his car that could.

Post Script
Earlier in the day on my way to work the snow was really coming down...I wasn't sure if I should ride my bike or not, but I did. As I was huffing and puffing through the snow I passed two cars stuck in the snow and others with really dissatisfied people brushing and scraping the ice from their windows. I only work about 1 mile from where I live (maybe even slightly less than a mile), so it's not very far. But on the way it gave me the opportunity the experience a bit of this beautiful winter's day that I may not have if I drove. It really put me in a good mood; it wasn't until later that I felt threatened or in danger. So to ask the question once more: Am I afraid riding a bike in the snow? No, I find it fun actually...but I take definite precautions and ride differently. I just wish car drivers did as well.
Email Post