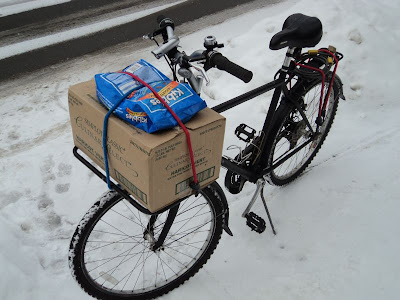 A cardboard box containing $36.22 in groceries (it's a great way to limit my spending...bring a box, and if it doesn't fit in the box I'm not buying it) and a 4lb. bag of dog food.

One of the (many) things I like about bikes is being able to do my own repairs...and I learn as I go. This past summer, for example, I succesfully removed and reinstalled this bike's crank and bottom bracket (with some issues, though...click here, here, or here to read about them). In the same way I like to do as many of my own repairs on my house, the same is said for my bikes (can't say the same about cars...when I look under a hood I don't even know what half the stuff is). But as is often the case I'm jumping ahead; let me start over. Over the past few weeks I've noticed a slight wobble in this bike when I'd coast. It wasn't always noticeable because of the constant snow we've had this winter, but I'd notice it when I was on dry pavement...a slight sort of shake going back-and-forth, and I could tell it was coming from the rear wheel. It's been getting progressively worse and felt as if the rim was bent but when I'd spin the rear wheel I'd see no indication of this. So today I decided to take a closer look...and it never occurred to me to look at the tire not the rim, until today (I did look at the tire previously...the sides, not the top....never thought the top could make it shake). The picture below (left) is the tire that was on the bike, the picture on the right is a tire I had in my basement and put on the bike today (replaced front and rear, actually). And no, those green dots are not something on the tire for traction, it is a tire worn through to it's under-layer. Not all of the tire was like that, just a section (odd); maybe that's why I didn't see it, and that's probably why the bike shook slightly. But much of the remaining tire was bald and largely without tread. The tire is a few years old but I had no idea it was that worn. At the beginning of the season when I prepped the bike for winter it surly wasn't (maybe tires hit a certain point and degenerate more quickly). But that's besides the point..it was bald and I have been barreling through the snow all winter on it. I've always been a bicycle advocate and a proponent of bicycle equality so this, to me, seems irresponsible. If this were a car tire I could receive a ticket, the same should be said for bicycles. Thankfully, though, it is a bicycle and I did not receive a ticket...but I'm even more thankful I didn't have a blowout and/or get injured. And by the way, after installing the new (used) knobby tires...no more wobble and the traction in the snow is noticeably improved. 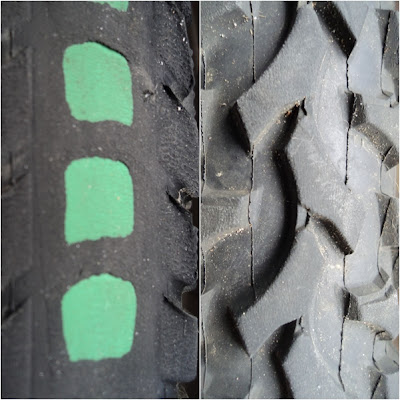 the_big_smile said…
Well, it is no problem to use a tire as long as you did.
The tire you show in the left picture will most probably have an intact carcasse, so there will be no problems with blowout.
But the traction in snow will surely be better with the new tire. ;-)

Sheldon Brown said, it is OK to wear tires down to the carcasse, as long you don't get a blowout.