A Few Toronto Pics (and a couple comments) 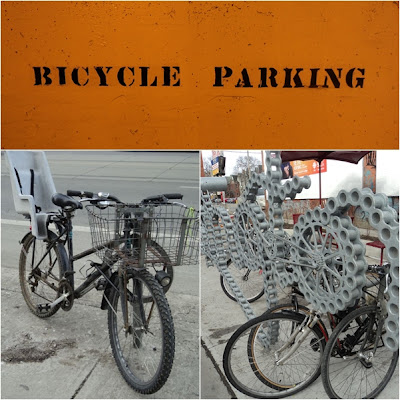 I was in Toronto the last couple of days and, as usual, was impressed. I go there once or twice a year--as I have for the past 25 years--for a day or two simply for a quick overnight (or two) getaway. It is a mere 100 miles (160K) from Buffalo, and only two hours away (if I--or the bus--drive slow) but it seems farther than that. While many Americans have disrespectfully compared it to being the "New York of Canada," (because of it's cosmopolitan feel, I suppose) I disagree and say it does this beautiful city a dis-service...this is an incredibly vibrant city and (to me) feels distinctively Canadian (and Canadians themselves are so friendly...yes, my Canadian friends reading this, you live up to your reputation). And according to the United Nations Toronto is one of the most multicultural cities in the world. Maybe this is why they have such a great bicycle culture. And yes, Torontonians reading this, I know you will disagree, I've read some of the articles in The Star where the writer would whine about lack of bicyclist's rights, segregated roadways, etc.  My response to that is try riding a bike in Buffalo for a month or so...it'll make you pine for a tourist pulling out in front of you on Queen West any day of the week. Anyhow, thank you to my northern neighbors for offering such an interesting an hospitable city to visit...now here's a few pics.

The top photo is a sign that greeted me as I drove my truck into the underground parking garage of my hotel (sometimes I bring my Dahon folder with me, but not this time). The photo on the left is a picture of a bike I saw parked on Bloor Street...it captured my attention because it looks like a bike that I would ride if my child were still young; a bike to carry everything you need and still plow through a bitter northern winter (an S.U.B., or a sport utility bicycle.). The pic on the right is a piece of artwork/bike rack made out of a giant bike chain that is at one of the entrances to the Kensington Market. But my favorite is the one below...Superman stopping a streetcar on Dundas and Yonge Streets, just to the left of Nathan Phillips Square. 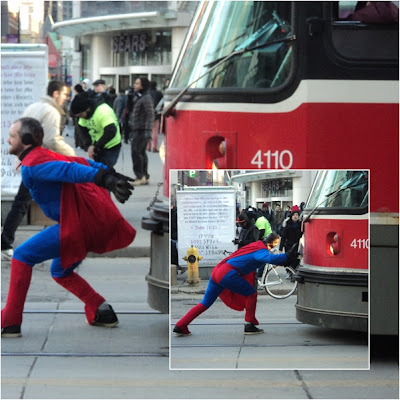 Alex said…
It's really refreshing to hear an outsider's perspective of Toronto. Also-- Love the superman pic.
February 23, 2011 at 11:19 PM

James D. Schwartz said…
Agreed, we do have it pretty good here (relatively). I've ridden in NYC and it's nowhere near as relaxing as we have it here (except on their new physically separated lanes).

These huge successes aside, I’d still prefer riding my bike in Toronto any day. Green painted lanes buffered from traffic with their own signal lights are nice and all, but they're still relatively lonely places — ignoring the jaywalkers — that lack crucial connections through particularly hairy parts of the city like midtown Manhattan. Riding in mixed traffic is great if you're looking for the occasional thrill of cars and cabs giving you absolutely no room or respect, but not if you're looking for a safe and stress-free commute home. Sidewalk parking is virtually non-existent, bikes are prohibited on buses and a huge challenge to take on the subway, and a kryptonite lock means nothing if you decide to leave your bike outside at night.

That is to say, Toronto isn’t alone in its struggle to become more multi-modal. Too often, bike success stories from abroad only make it to our fair city once the battle has already been won. Left out of the picture are the all too similar struggles it took each city to get there.

Sure New York City has come a long way, but that’s partly because of how far it has to go. But if they continue to expand its bike infrastructure at this pace, I have every confidence New York City will surpass Toronto in terms of bikeability.

But until then, I’d rather ride on College Street.

James, Thanks as always for your comments (and writing your excellent blog). Yes, cycling in NYC can be a harrowing experience...even thought there are plenty of lanes and markings. And while Buffalo doesn't have the extensive bike lanes and other bike-friendly infrastructure as NYC and TO we are getting better at it...but nonetheless it is very trying at times.
February 26, 2011 at 12:31 PM