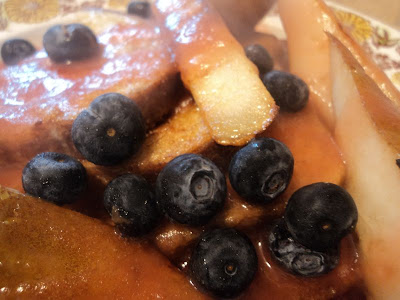 I've posted in the past that my son's favorite breakfast (or lunch) is French toast (click here, here, or here), and this is just another variation. I, of course, used homemade whole wheat bread for this version, but I also made a sort of syrup/puree out of apple, nectarine, honey, and simple syrup. And while the bread cooked I caramelized fresh pear and at the last minute added blueberries to the pan for just a few seconds...the outcome was delicious (as confirmed by the smile on my son's face as I handed him the heaping plate and the cleaned plate that he handed back 5 minutes later).

Anyhow, a bit of explanation of the title of the post. French Toast, as many may know, is called pain perdue (or perdu), which translates as lost bread in French Louisiana dialect and some other French speaking areas of the world. It makes reference to the bread being stale, or "lost;" something someone would cook if they were low on cash or being frugal (of which I am both). But as I cooked my son's breakfast I couldn't help but think that if I were serving this in a restaurant this would get top dollar...freshly made bread (anything but lost) topped with fresh fruit and a fruit puree; it should be called pain trouvé, or "found bread" in my opinion. This, I thought, belongs more to Haute Cuisine (high cooking) than it does Cuisine Paysan (or peasant cooking).

Anyhow, sorry for the somewhat self-centered tangent (more of a stream of thought, really), here's how to make it (and the variations are up to you...use whatever fruit or bread that you have on hand or really like).

Make a basic custard by mixing together a few eggs and a bit of milk; lay a few slices of bread in a bowl and pour the egg mixture over them. While the bread soaks, make a fruit syrup/puree. Do this by first combining a small amount of sugar, water, and honey in a small pan and bringing it to a simmer (I also added a pinch of cinnamon); then add whatever sliced or diced fruit that you like. Cook the fruit for a few minutes, transfer it to a blender; then after pureeing it, transfer it back to the pan. Simmer the puree while you cook the bread; it will become thick and syrupy (but at the same time be careful not to burn it). 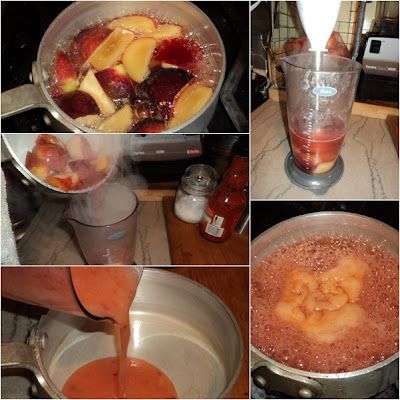 While the syrup cooks, cook the bread that has been soaking in the custard. Turn it a couple of times so it browns without burning and cooks the eggs that have soaked into the center of the bread. And as the bread cooks add whatever fruit you like to the pan and caramelize it to bring out it's natural sweetness. If you are using delicate fruit, such as berries, give them just a few seconds in the hot fat to bring out their flavor and break their skins a bit. 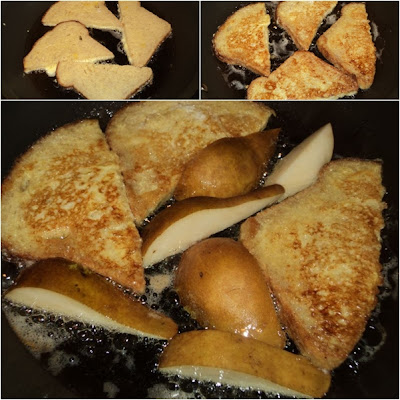 Arrange everything on a plate (or plates) and pour the syrup over. The best part is the next...seeing the look on the person's face as they eat it. Yum! 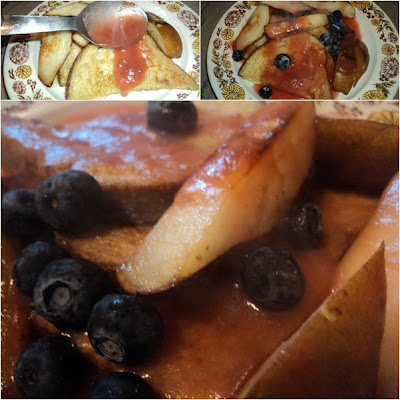