Ubuntu, A Second Opinion, and an Electronic Resurrection 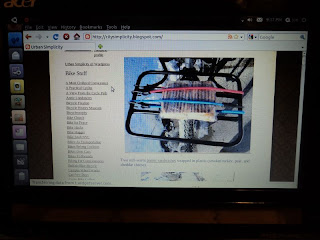 The above image is a screen shot of my netbook, the same netbook that I ranted about in an earlier post...referring to it as mass-produced cheap crap. In that mini-rant I lamented on the lack of quality...how things are not built to last these days. The netbook had crashed for no explained reason--out of the blue--and when I took it to a computer repair shop (and paid $43) I was told simply that it was crap and that was not repairable...and that even if he could repair it it would cost more than it was worth (keep in mind the machine was a mere 18 months old). Anyhow, I was a hair away from throwing the thing against the wall and pulling it's teeny hard disk out to retrieve its data when I thought I'd get a second opinion...someone that I knew wouldn't charge me just to look at it. He took it with him and I thought I'd never see it again. He shows up a few weeks later at work (he's our tech guy at work), plugs it in and it boots right up. What? He says that it's teeny little NAND drive was full and it simply needed to be cleaned. I of course was over-joyed, but it was running--as it had from the very start--as sow as a snail. It's operating system was (and I consciously use the past tense) Windows XP; that's what it came loaded with. That in itself took up most of the space on the drive, he told me. Thus he suggested, as he handed me a little 2 gig thumb drive, I change the operating system to Ubuntu...that it takes up far less space and that it is an open source system. I like open source products I told him (not only because they are free, but also because of what they stand for), my word processor and browser of choice these days are Open Office and Firefox. I know how to load and delete programs, I told him, and tweak the system, move things around, etc...but an operating system, I'm not so sure. You can do it yourself he replied, just follow the directions...and when it asks if you want to load it next to your current system or delete and override your current one, delete windows...you don't have enough room. What the hell, I thought...this little computer was dead as far as I was concerned, but now like an electronic Lazarus, it was back from the grave. It took a few times for me to load the system (mostly because of human error...mine) and when it finally asked me if I was really sure that I wanted to delete the currant operating system (it asks two or three times) I touched the enter key hesitantly...

A few thoughts. Firstly, it was awkward (mostly because it was not like windows...my son says it resembles a Mac interface a bit). It also came loaded with Open Office and Firefox. But after a few tweaks and getting used to it...I really like it, and it is entirely free (the current price of Windows 7 is $274). But here's the really interesting thing...the little netbook runs better and faster than it ever has, even than when it was brand new.

I'm actually thinking of installing Ubuntu on my desktop next to the current system (it offers that option), but am leery as I'm not sure all my programs will run on it. The moral of this story, I suppose--and this is likely with most stories--is that it is worth it to get a second opinion. You never know the answer.

amoeba said…
I always wondered what XP stood for. I now believe after years of the XP eXPerience, that it stands for eXPerimental; eXPectorating; eXPensive; eXPletives; eXPloder; eXPloitable; eXPunge; ineXPert.
February 24, 2011 at 1:18 AM

After using Suse and then Redhat, I changed to Windows 2000 in 2004/2005, because of serious problems getting Redhat play all videoformats. I dind't want to spend hours and day on compiling mplayer again and again.... And I wanted to have time for my first daughter. She was born in summer 2004.
But I never got used to windows.
2008 I stumbeled across Ubuntu and tested it on my machine and was suprised, that Ubuntu recognised all hardware on my machine. So I installed it and since then I only switched from one Ubuntu to the next Ubuntu.

Joe, if should find Ubuntu booting but not launching any applications, then your harddrive might be full again.
I had this problems a few month ago and my first thought was, that the system would be broken.

If that shoud happen, boot the machine from your installation stick and delete files from the harddrive.
Very simple to do. ;-)
February 24, 2011 at 1:34 PM