Why I Like to Carry Things on My Bike(s) 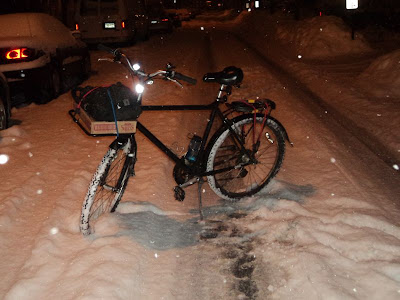 The title to this post should really read: Why I Like to Carry Things on My Bike(s) and Why I Like to Take Pictures of the Things I Carry on My Bikes and Then Sometimes Write About it. But then again I don't really care for lengthy headings. I'm of course referring to the Things That Can Be Carried On A Bike series on this blog.

To answer this question is no easy task, but to sum it up I'll say this: Because I can, and because I think it's really fun. This second part seems more important to me. But it is, of course, more than this.

Sometimes I'll post in a tongue-in cheek fashion carrying something as simple as a couple of sandwiches or a teeny homie figure (and I really like carrying silly stuff like that), but other times I carry things that many would not think possible to carry on a bike (click here for a few photos from a "best of" which I posted last fall)...these are the things that are truly fun to carry.

Please keep a few things in mind, and I've mentioned these before. I am not car-free but I ride whenever I am able (but in the spring, summer, and fall I am often nearly car-free), and I am not a twenty-something hipster (though I was once); I am a middle aged guy with creaky knees and reoccurring back problems who often rides a 60lb cargo bike (and in the winter my 40lb semi-cargo winter bike, pictured above).

My point is this. Bikes matter...and they matter now more than ever. I've also said this before, but for those who haven't ridden a bike in a while (or years) you may be surprised at how good it feels...how freeing it is...to feel the sun on your face and to use your own energy for propeltion. But when you carry stuff it's even better (I think)...because you are not only the engine but also part of the cargo.

Here's another suggestive point. Even if you believe global warming to be a fallacy (which some do but I do not) think of the money you will save. Whether or not there are problems in the Middle East  the prices at the pump will always fluctuate but continue to rise (Big Brother has to make money).

As the long winter winds down I look forward to the warm months ahead not only for the weather, but also to ride more frequently--daily--and to carry  stuff on my bike(s). I ride and carry stuff on my bikes for many reasons...but mostly because I like doing it. Why do people climb a mountain or walk across the country? They have some sort of compulsion, I suppose. The same--though on a lesser and more daily level--can be said about me carrying stuff on a bike. I do it because I think it's fun.

I realize that I of course am not the only person on this planet that rides and carries things on their bikes, but in America we are few (compared to elsewhere). Many other cultures  have used  bikes for transportation and other utilitarian purposes for the past hundred years and it seems like we all need to start to consider this.

I've posted the below video more than once before but if you have not seen it and are a cyclist (or especially if you are not a cyclist) I hope you watch it. I don't know who made the short film or who is speaking, but the narrator could be me. It's not, but it could be.

In summary, I ride and carry things on my bikes for may reasons but mostly because I can...and I really enjoy it. I'll get off my little soap box now.

amoeba said…
The reason why some people believe global warming is a fallacy, is one or more of the following:
a) They don't know what they're talking about.
b) They know what they're talking about but are paid to lie by the denial industry. A Denial Industry that lied about tobacco and cancer, the dangers of asbestos and now the Denial Industry are making a fortune lying about climate change.
c) They've NEVER read any science. There's loads of it. And it says very clearly that the world is warming more rapidly than at any time seen in the records. The warming is due primarily to CO2 levels that are higher now than at any time in the last 800,000 years and probably the last 15 million years. BTW, it isn't the sun. The CO2 was put there by human activity. For all those climate myths debunked with actual science, see http://www.skepticalscience.com
d)They believe all the pseudo-scientific garbage emanating from think-tanks funded by Exxon and Koch industries.

Joe said…
Amoeba...ditto...couldn't agree more. I don't understand how people can deny climate change when we are witnessing it first hand as we live today. Thanks for the reading material, and thanks too for visiting. Peace.
March 2, 2011 at 10:19 PM