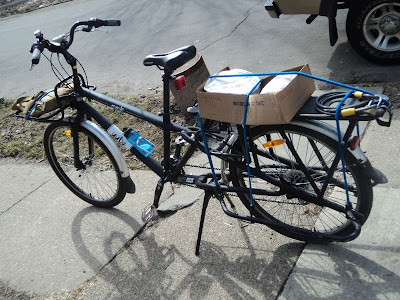 A canvas book bag (on the front rack) containing books and other items. An open cardboard box containing two portions of Stuffed Chicken Florentine (if you'd like a recipe, this one looks pretty good), a loaf of freshly baked whole wheat bread, and a 6' cable lock.

The above photo is one that I took after I arrived home for the second time...and after I secured the rear box with the bungee cord running lengthwise on the rear rack. I was on my way home from work and thinking what a beautiful day it was and not really paying attention to the contents of the rear rack. Well, after the long cold winter our roads are full of horrendous potholes (click here for a few other translations of the word) so it can be quite bumpy sometimes. To make a long story short, when I arrived home I was dismayed to learn the the box on the rear carrier was sans bread....

After retracing my ride I found it five city blocks back lying on the sidewalk (pavement) just as you see it below. I was surprised someone didn't take it, or it wasn't run over by a passing car as it bounced out (the plastic wrap held tight and it even stationed itself in an upright position as it came to a stop). The moral of this story I suppose...if you question whether things are securely fastened, they probably are not. 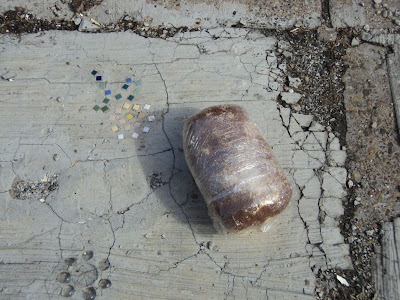 Anonymous said…
I have enjoyed your blog since finding it sometime last year. I am going to have to try some of your recipes and your sourdough starter is a must as I lost mine years ago! Thanks for taking the time to do this blog, it is a joy to read!
March 19, 2011 at 3:47 PM

junemoon said…
I absolutely love the story n the pic of the wayward loaf of bread! Ur advice about making sure the load is secured translates across our lives ~
March 22, 2011 at 3:15 PM

Joe said…
Junemoon...I laughed out loud when I retraced my ride and saw it lying there...and then people probably really thought I was a little nuts when I started taking pictures of a loaf of bread on the sidewalk. Thanks for reading and commenting.
March 22, 2011 at 9:34 PM