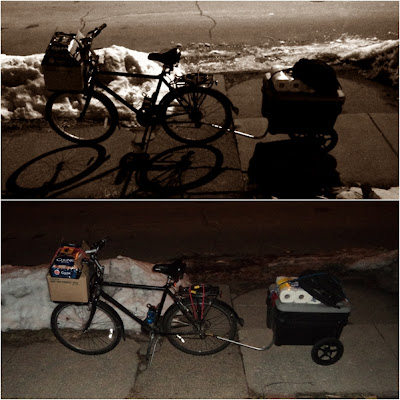 Things that were carried (and pulled) on this particular ride:
$121.47 in groceries and sundries, an 8lb. bag of dog food, 3L of red wine, and a gym bag full of wet clothes.

A few comments:
As stated over and over again (and over again) on this blog...I am not car-free, just car-lite, sometimes lighter than others. And it seems that this past winter has really been crunching the numbers with my riding ratio...the frigid cold and snowy winter has put somewhat of a damper on my riding, but not entirely of course. If I had to pick a number I would say that I still managed to ride or walk at least 75% of my (short) trips this past winter; opposed to something probably like 90% when the roads are clear. Anyhow, here's an example of how a person can spend a day car-free and still accomplish a lot.

In the morning I rode my winter bike (pictured above) the short commute to work. Then after work I rode home, making a slight detour to stop at the bank. After stopping home I hitched the trailer to the bike and strapped an empty cardboard box to the front rack then rode the the health club for a brief steam and swim (I felt I only had to do half my regular workout when I was riding a 40lb bike and pulling a trailer into the wind...the bike ride was a workout in itself). On the way to the health club I stopped first to buy some wine (I get thirsty with all that pedaling and swimming), and then to another store to purchase dog food. After the swim I stopped at the grocery store on the way home and load up. When I brought the cart full of groceries out I looked at it's fullness, then looked at the bike/trailer and really wondered how I was going to do this; the trailer and box on the front were literally overflowing (I had to push down on it like an over-stuffed suitcase to latch it)...but I did.

All-in-all, I probably only covered 10 miles throughout the day...but I did it using my own energy, and that makes me feel good, physically, psychologically, and emotionally. Even though I--like many cargo bikers--do this often, I still find it fun and amazing to do. Bikes, of course, are far from being simply a recreational toy, and they are much more than just a mode of transport (though they are really good at that)...bikes are also a utilitarian machine that carry not only you but also your cargo. 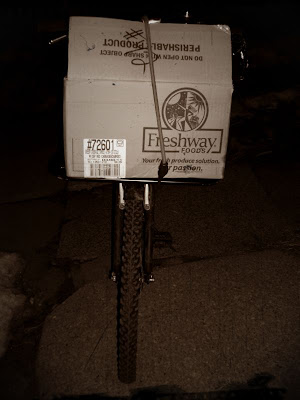 “There are three monks, who had been sitting in deep meditation for many years amidst the Himalayan snow peaks, never speaking a word, in utter silence. One morning, one of the three suddenly speaks up and says, ‘What a lovely morning this is.’ And he falls silent again. Five years of silence pass, when all at once the second monk speaks up and says, ‘But we could do with some rain.’ There is silence among them for another five years, when suddenly the third monk says, ‘Why can’t you two stop chattering?”