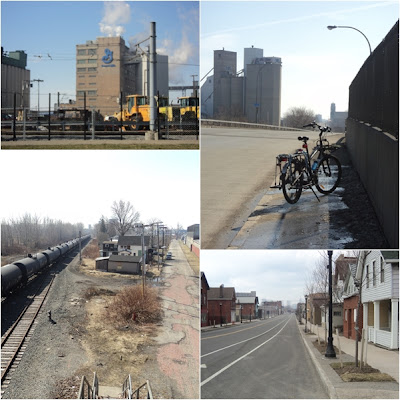 As mentioned in a previous post I had gone on a longish ride today for exercise. Actually it was probably the longest I've ridden the Mundo at one time...over 22 miles (35km). I know that's not a lot for some people (many people) but it is for me...especially when you are nearly 50 years old riding a 65lb bicycle. Anyhow, to get to my destination I had to ride through South Buffalo, which while it is part of the city proper it always feels different to me. It is separated but the rest of the city by water, railroad, and industry, thus making it feel like it's own entity I suppose. This is also some of the oldest sections of the city and as I don't get down here that often (especially on bike) I snapped a few photos.

Top left...General mills plant; the reason Buffalo smells like Cheerios in the morning.
Bottom left...a working class scene taken from a railroad trestle in the Valley.
Top right..a view from the same trestle; classic old time Buffalo view...a towering grain elevator with a church in the distance.
Bottom Right...riding down Seneca street in the shadow of the Larkin Building (which was designed by Frank Lloyd Wright)It's easy to see how old these houses are by how close they sit to the street. And the street is recently re-paved...surprisingly it includes a bike lane.

Below is an image of the impressive Botanical Gardens in South Park (which is part of the Frederick Law Olmsted Park System); it sits nearly in the shadow of Our Lady of Victory Basilica. 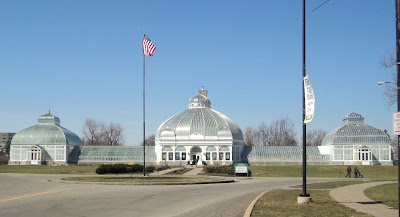 Anyhow...this brings me to my computer. Last summer I purchased this inexpensive wireless computer (odometer). I mounted it but before I programed it I missplaced the directions...thus I don't belive I ever had it working correctly. But joy of joy the Internet is incredible (isn't it?). After doing a few simple google searches I came upon this page that helped me out. Now it's easy to see (counter clockwise, starting at upper left) that I traveled a little over 22 miles and it took me nearly 2 hours total travel time (not bad for a leisurely ride on a heavy seven ft. bike). I burned almost 700 calories and my average speed was 11mph/18kmh.

I have a pipe dream of taking the Mundo on an extended trip...I'd be interested in hearing if any Mundo owners out there have taken their bikes over the road (sure would be easy to carry whatever you need). 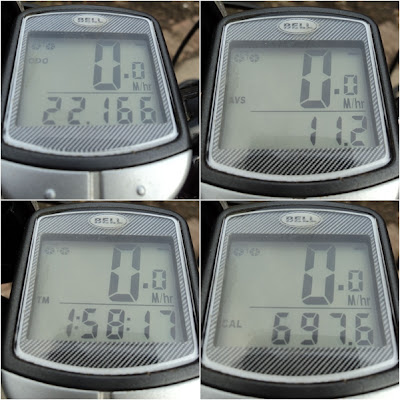 My longest ride on the Mundo was 27km. But I had the first 13,6km with my elder daughter sitting on the rack and my younger daughter sitting in the Chariot attached to the bike.
On the second 13,6km both girls were with mama in her car and I rode without the Chariot home again.
In the meantime we were all swimming.

An average speed of 18km/h is not bad for a guy our age on a Mundo!
Congratulations for that!

To be honnest, I don't know my average speed on the Mundo, because I allmost allways have the Chariot with me.
And together with the Chariot I do about 14km/h or a little less in downtown traffic.
April 3, 2011 at 5:00 PM

Joe said…
Stefan, as a Mundo owner you know how well they ride...the 22m/35k was (nearly) effortless...other than the head-wind. I'd like to take a longer trip. The bike is so comfortable. Thanks as always for your comments.
April 3, 2011 at 10:00 PM