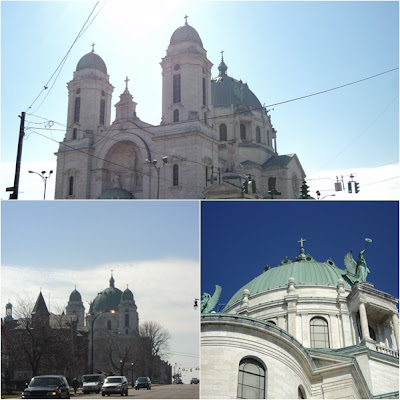 OK, firstly this was not an actual pilgrimage (just thought I'd get your attention), but more of a long ride on the Mundo through South Buffalo to Lackawanna, NY with the destination of a local Basilica and Shrine. It was a beautiful day, albeit a bit chilly, and I felt like I needed some exercise (haven't been able to swim for the past week or so because of a bruised--hopefully not cracked--rib). Anyhow, I rode to Our Lady of Victory Basilica for a couple reasons (besides wanting exercise)...one is that I like to have a destination in mind when I start out, and also I wanted to see the Father Baker Museum that I had heard about which is housed in the basement of the Church.

Before I continue I'll offer a bit of personal and some family info. Firstly, while I am a Christian I believe that all major or True religions are legitimate and have their place. Also, I am not Catholic but have a deep respect for Catholicism. On my Dad's side of the family, he, his parents, all of his siblings and anscestors were or are Catholic; on my mom's side of the family, my grandfather, his parents, siblings and all of his ancestors were Catholic, but my grandmother (on my mom's side) was Protestant...thus my mom, and her children (including yours truly) were raised Protestant. With this said, I would have difficulty living withing the restraints of Catholicism...the Church of which I am a member is part of one of the most liberal mainline denominations (UCC)...and I need that...liberal, open mind (and heart)...everyone (and I mean everyone) is welcome at our church. Anyhow, besides all that, I still find the rich tradition of the Catholic Church both mystical and moving. And at least a couple times a year I find myself sitting in the back pew of a grand old church listening at the whispering in the air echo of the stone walls...thus was the case today at OLV.

Anyhow...I'm getting off point here. What I wanted to do was highlight both this Basilica and Father Baker in this post. I was only in this church one other time (years ago) and it is truly breathtaking...and I mean that literally; it's beauty can take your breath away. The above photos were taken as I approached the church...as it overlooks the city of  Lackawanna. After I went to museum I went to a portion of the noon Mass. The interior is even more spectacular but I did not feel comfortable taking photographs. The below picture was taken by Matt Roginski (click it for a larger view; click here to see more pictures). 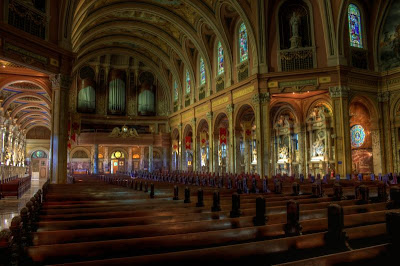 Back to Father Baker. I've always known of his local legacy but until I went through his museum never really new how much he did. He was an incredible human being (some might even say Saint...he is in the process of being Canonized). To read more about him and his incredible life click here. 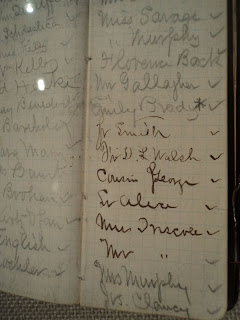 He was said to work tirelessly for others, both literally and spiritually. One of the things that he was said to do was pray for whoever asked....and apparently a lot of people asked. But still he never turned anyone down and prayed for each person by name whenever they asked. Because of the amount of requests he carried little leather notbooks with him and would write the names of the prayer requests in them and check them off as he prayed for them. The above image is one I took in the museum; it's one of many of his little prayer books that were on display but this one was the only one open. What immediatly caught my attention when I looked at the book--and the reason I took the photo--is the name that is sixth from the bottom...the surname looks to me to be George (my last name), but I can't make out the first name. The George side of my family came to the USA in 1920 (I believe) and has lived in the Buffalo area ever since...I can only wonder if Father Baker (who passed away in 1936) personally prayed for one of my direct ancestors (there's not a lot of Georges in the area).

After leaving the church it was such a beautiful day and the Mundo is such a beautiful bike to ride that I thought I'd ride some more; I rode through the graveyard directly behind the Basilica to look for Father Baker's grave (which I'd never seen before); my grandparents are also buried in this cemetery.

I don't believe I am morbid nor do I think I am in the minority when I say that I find cemeteries peaceful (if you've ever walked through Père Lachaise Cemetery in Paris then you know how beautiful it can be...not to mention the history). Anyhow, after finding Father Baker's grave I passed the teeny little chapel pictured below. And no they are not Photoshopped; the photos are not edited. When I raised my cheap little camera the sun glared into the lens but I still snapped a few photos...below are the results. 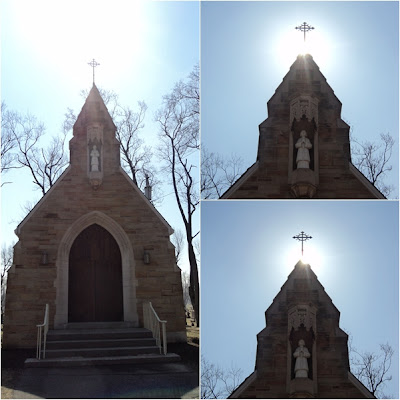 You are right, this basilica look great, especialy from the inside!

I like the thought of people like this Father Baker who prayed for other people on request. To me it looks, it might be right if he got canonized.

On the other hand, the Catholic is not so important to me, but I know, Saint are important to most of Catholic people.
And to me it feels, like this man did what he could to help other people.
April 3, 2011 at 5:23 PM

Debor said…
Thanks for the beautiful photos of Buffalo! And thank you for the photo's of OLV. For some reason, even growing up Catholic, I have never been there. I will have to go next trip. And to the Botanical Park. And to Shakespeare in the Park. And... the list goes on.
April 3, 2011 at 9:09 PM

Joe said…
Stefan, thanks for your comments...yes the Basilica is beautiful (probably like some you may see in Germany)...Fr. Baker is an inspiration.

Debor, thanks for reading...and yes, despite it's sometimes unsavory reputation from people who have never lived here...Buffalo has its share of beauty.
April 3, 2011 at 9:57 PM