But Some Seed Fell on Fertil Soil 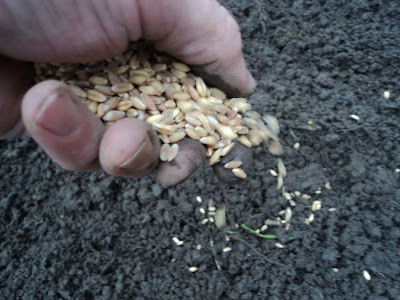 Every year I turn the tiny plot that surrounds my house into a vegetable garden...and every year it is another experiment; seeing what works and what doesn't; what grows and what doesn't. Usually I have most things in the ground by now but am running late because of the cold and relentless rain. This year's experiment is to plant things even closer than I did last year (for high yield and low weeds) and to grow a little wheat (pictured above). I know I don't have enough space to grow any usable amount of wheat, but in the same way that I grow a mere 2 dozen stalks of corn each year, I figure I'll grow it as more of a novelty...and it''l look nice too. And I'd rather have wheat and corn growing in my front yard than have grass to cut and water. I hope these seeds fell on good soil.

"A farmer went out to sow his seed. As he was scattering the seed, some fell along the path, and the birds came and ate it up. Some fell on rocky places, where it did not have much soil. It sprang up quickly, because the soil was shallow. But when the sun came up, the plants were scorched, and they withered because they had no root. Other seed fell among thorns, which grew up and choked the plants, so that they did not bear grain. Still other seed fell on good soil. It came up, grew and produced a crop, some multiplying thirty, some sixty, some a hundred times."
Mark 4:3-8 (NIV)