A Car-Lite Diet (and why all my bikes are black) 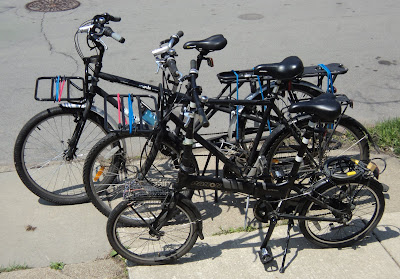 This post is in response to a couple things....one is something that (nearly) happened to me, and the other is a website I came across. But first a bit about my bikes.

While I have six bikes I generally only ride three (the three pictured), but all are painted black. I'm thinking about paring my fleet down to just three...selling four to purchase a new winter commuter, but keeping two, the folder and the cargo bike. To be honest I'm not sure why all my bikes are painted black (thought it would be a good hook in the title), but I will say I like how they look. If they didn't come painted black I usually paint them after a while. The only bike I did not paint black was my v1 Mundo because I new I would eventually sell it to purchase the v3 (which I ordered in matte black). I like the retro look of a black bike, but I sometimes tell people it is in response to this famous quote by Henry Ford:

Any customer can have a car painted any colour that he wants so long as it is black.

Anyhow, this brings me to the thing that nearly happened to me as I rode my usual short commute to work yesterday morning. This single sentence which I wrote on Facebook sums it up:

Joe nearly got sideswiped (riding his bike) by a very wide man in a very wide vehicle on a really narrow road.

I had just crossed the intersection of Allen and Delaware and was looking at the price of gas at the petrol station (ironic, right?). I was surprised that it was still only $4.09/gal because other areas of the  city it is higher. And as I'm doing this I see a man pulling out of the driveway of the station...he had that "I'm stressed out and already late-for-work" look on his face. I had the right-of-way; he was pulling out of the driveway and I was on the street going straight ahead. I did as I often do in this instance...make eye contact to make sure that the driver sees me. And yes, he was a rather "wide" man, sort of poured into his big cushy seat; he was driving a big wide SUV. On a little side-note, Allen Street, which is one of my favorite streets in the city in which I live, is also a very narrow street. It is, in fact, not uncommon for two oncoming cars to come to a standstill until one allows the other to pass...because of its narrowness it is easy to keep pace with the cars while riding a bike. But back to the story. So after making eye contact with Mr. Wide I figure it is safe to keep pedaling...umm, think again. I'm only about 10 feet before him and he looks in both directions (for cars no doubt, not cyclists) then hits the gas pedal and goes for it. I, in turn, had no choice but to swerve and hit the brakes. The only other person who witnessed it (I believe) was another motorist getting into a nearby vehicle. He gave me a look of sympathy and simply shook his head.

As the regular readers of this blog are well-aware, I am not car-free but car-lite...I make no bones about it. And while I often write pro-bicycling posts, I try not to be too negative on people who drive because not only do I believe that is their personal business but it would also be hypocritical because I still own a gas-powered vehicle. In addition, I generally try not to be cynical or sarcastic on this blog because I feel like we are bombarded by negativity on a daily basis. All these things said, I cannot help myself but post this next statement about the man that nearly plowed me down...I can't help but wonder if he didn't walk or ride a bike every so often, instead of sit in the big cushy seat of his really wide vehicle, he himself may not be as wide as he was. My apologies if any find this last comment offensive, I don't mean it to be; the situation was just very frustrating.

The next thing that got me thinking about writing this post was a website I stumbled across, Austin on Two Wheels. At their site they have a triangle that  mimics the USDA Food Pyramid, only theirs relates to transportation and they call it The Low Car Diet. This made perfect sense to me even though it didn't relate to me exactly. On theirs, for instance, they have listed car pooling and car sharing; two things that I do not do. Thus my low car diet would look more like the triangle below. I mostly bicycle to get around, seconded by walking, but still use my car once a week or so (in the snowiest or coldest days of winter these categories may blur a little).

Not everyone can be car free, but everyone (or at least most) can use other means of transportation sometimes. Another thing that I can't help but wonder about Mr. Wide is that if he were walking or on a bike he may not have looked so stressed. My job, like many, is stressful. And the ride or walk to work in the morning is often the best part--it helps clear my head and get me centered for the day--the only thing better is the ride or walk home.

In the same way that a person who is fervently religious wants to convert you because they want you to have what they have...to share their joy. This is how I feel about getting around on bikes and foot...I want to share the joy I get from it. Our society is so dependent on cars that for most the thought of hopping on a bike doesn't even enter their minds, not even for a short distance. It's easy, anyone can do it. My hope is that more will.

If you'd like to read more about going car-lite--and how people are doing it--the following are two excellent posts. Here and Here. 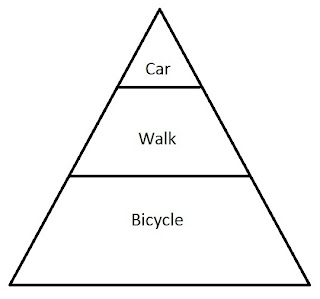