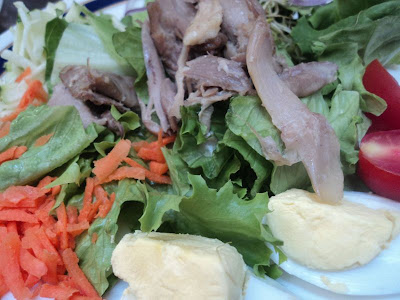 I haven't made duck conft in quite a while but it was on the menu of a somewhat large luncheon I served a few days ago so I made it in a large scale (96 duck legs). The recipe's title, confit de canard, translates from the French simply as preserved duck...and that's what it originally was. It's preparation is quite simple but may seem complicated at first because of the amount of time it takes...2-4 days, depending on how long you let the duck cure before you cook it. But the amount of actual time you spend preparing it is minimal...like most truly good foods, this one almost prepares itself, you simply guide it along.

Anyhow, the recipe goes like this: salt the duck, add herbs (usually fresh thyme, and layer it in a pan with onions and garlic between a few sheets of clean cloth (to absorb juices). After a couple (or a few) days, remove the duck and brush off the onions and herbs. Then (and this may sound odd to the uninitiated), poach it in rendered fat for hours...until the meat falls from the bone. And the best fat to use is it's own, but in the event you don't have rendered duck fat you can also use chicken fat (shmaltz), or in a pinch, vegetable oil. I used a combination of duck fat, chicken fat, and a small amount of bacon fat for extra flavor.

By this description you probably are picturing salty and greasy duck legs...au contraire. If prepared correctly this will be the most succulent, moist, and flavorful duck you've ever had...and--to use an appropriate comparison--it will be as soft as butter.

This is called preserved duck because this recipe (like many truly delicious ones that have stood the test of time) began out of necessity before the advent of the electric refrigerator. The duck, after it was poached in its own fat, was left to cool. The fat would solidify, sealing it from the elements. It was, I've read, kept in the cellar for months. Not only is this no longer necessary but with the way today's animals are raised I don't recommend it. But I definitely recommend you try this recipe if you enjoy duck...it'll be delicious, and you'll be able to impress your friend with your French cooking skills.

To lighten it up a bit I served the meat removed from the bone, warmed, and atop a salad (with potato, hard cooked egg, and a variety of shredded vegetables). Paired with an orange vinaigrette it is a contemporary play on the classic Canard à l'Orange.

I don't have a typed recipe for this because this is the type of thing I just sort of do, but if you like to see a recipe this one and this one look pretty good (and both are for the home cook). 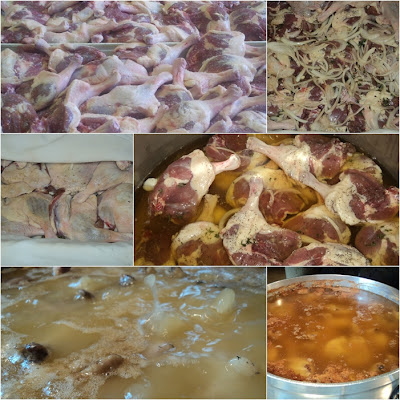 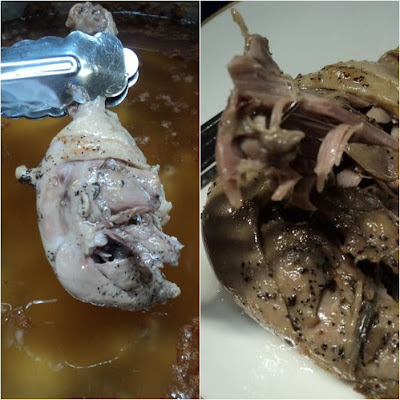