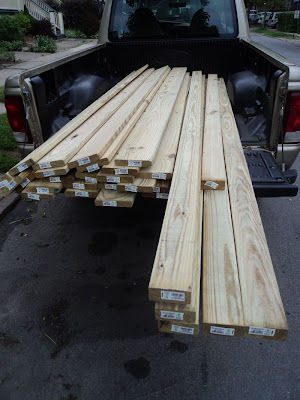 This post is a first for me in that I am showing something being carried in my truck. In the more than 3 years I've had this blog I have never showed a picture of my vehicle and prefer to post about pro-bicycle/human transport instead. As regular readers of this blog know, I also prefer posting about things that can be carried on a bike, which is is one of my favorite and most popular postings.

I purchased the above lumber today to build a small patio off the side entrance of my house and I have been trying to figure out how to carry it on my bike...I thought about carrying it in a series of trips, but alas I do know the limitations of my bicycles (yes even the Mundo). These 29 boards are 8 and 10 feet in length (2.4 and 3m), and they are pressure treated lumber making them extremely heavy. I figure the only way I would have gotten this lumber home by bike would be on a Bikes at Work Trailer (which I do not own, though I have considered it). Anyhow, the reason I preface the following and brief story with this information is because I don't want you to think that this post is about the truck...it's more about what happened while I was hauling this lumber. But I'm starting to jump ahead as usual.

So there I was driving very slowly home...the wood was neatly stacked and I had my hazard lights blinking to alert other drivers of my slowness. The truck bed is 6ft long (1.8m) and with the tailgate down it's nearly 8ft, this means that only a few of the boards hung over a little (only five of the boards were 10ft, the rest were 8ft); I've carried longer boards (12ft/3.6m) and have made it home successfully. But not this time.

As I slowly crossed this busy intersection the truck bounced slightly against an unseen and unexpected bump in the road (was it a manhole cover?). And like in a dream I looked in my rear-view mirror to see the lumber rise up in unison and slide off the rear of the truck...depositing itself literally in the middle of the intersection. Traffic came to a halt. Oddly, I didn't freak out and slowly put the truck in reverse. But before I even backed up the 20 feet to the lumber a man had pulled his car over and was in the street with another (who I think was at the bus stop) and they were gathering the wood. As soon as I got out of the truck I thanked them profusely. It took us about 5 minutes to reload the truck and as the one guy got into his vehicle I thanked him again and said that "I owed him one." "You don't owe me anything," he replied, "hopefully someone will help me when I'm in need some day." All I could do was smile.

One of the nicknames for Buffalo (the city in which I live) is The City of Good Neighbors, and I really believe this is true. As any Buffalonian will tell you it's the people that really make this city...but I also can't help thinking that if this happened in any city in the world someone wouldn't have gotten out to help me. It's in our nature as human beings to help one another...it's our Original Goodness (to quote Eknath Easwaran).

And as I drove the rest of the way home--even more slowly than earlier--I thought of how even in the midst of the chaos and carnage that happens in the world today people are still good. I also thought of this scripture passage and the following quote by Anne Frank.

"Despite everything, I believe that people are really good at heart."

I made it home safely and had enough time to build the tiny patio (most of it) before the evening rains came; if it's clear tomorrow that's where I'll have my morning coffee...and I'll remember the spontaneous generosity of the two anonymous men who helped me today.
Email Post