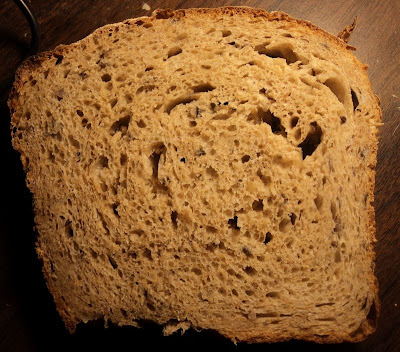 This post is in response to a recent question by a reader; this wasn't the first time this question was asked, just the most recent...and even after baking countless loaves of bread the same thing happens to me every so often, but it is completely fixable. What I am talking abut is the consistency of a bread dough. The reader asked why her Ezekiel dough was so wet, almost like a cake batter (even though she followed the directions and measurements exactly). The answer to this is twofold. Firstly, when making bread with any type of ingredient that is boiled first--grains, rice, beans, potatoes, etc--there are a lot of variables in the consistency because of the liquid concentration in the said ingredient...one person squeezes it dry while another leaves a bit more liquid. Or in the case that happened to me this past weekend when I was making a wild rice dough (pictured in this post). I received a phone call as I was preparing the recipe and drained the grain but did not squeeze it at all. I then proceeded to add it to the recipe as if I did squeeze out most of its moisture. This of course added a lot more liquid to the dough which was, to say the least, a soggy mess at first. Fixing this is as simple as adding more flour (before the dough is kneaded); if you have to add a great deal more flour, such as I did in this recipe, you may have to add more salt, yeast, etc.  Ultimately, though, you end up with more dough. You can do  as I did and make a pizza and two really large loaves, or make extra loves and give them away. The dough itself can also be frozen and used at a later date. 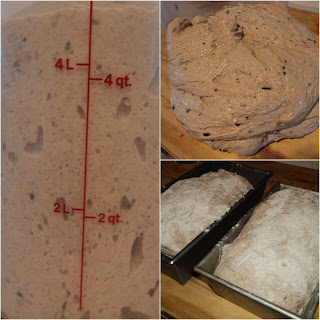 Keep in mind that it is better to have a dough that is a bit wet than one that is too dry. If a dough is on the soft and wet side it will produce a soft and light bread with a holey and airy interior (as pictured above), but if it is too dry the finished product can be heavy with a dense interior and low rise.

The other thing that affects measurements is how the flour is actually measured. And this is a common problem with whatever type of bread you may be making. The problem is that we Americans measure our flour by volume (by the cup) rather than by weight (on a scale) the way much of the rest of the world does. Let me illustrate this problem with a short scenario. If 3 people measure out 5oz (142g) of flour on a scale all three would undoubtedly end up with the same amount; 5oz (142g). But, on the other hand, if these same 3 people were to measure out a cup of flour and then weigh the contents of their cups I can almost guarantee that all three would weigh different. Why? Well this is simple if you think about it. One person may pack the flour in the cup while the other fills it loosely. One cup may have air pockets in the flour while another does not. And one person may level the top of the cup with a scraper while the other may use a rounded (or over-filled) cup of flour. On average a cup of bread flour weighs about 4.5oz (128g) but measurements, by volume, can vary by as much as an ounce (28g). Now multiply this by 3, 6, or 12 cups, and you can see the effect it may have on the total measurement. Add a wet grain, that may or may not be squeezed well, and  this throws in an entirely new curve-ball. 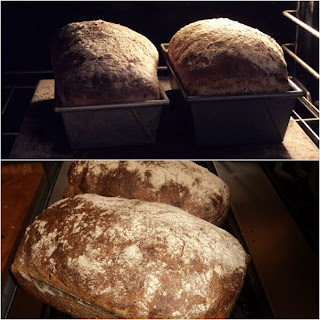 The bottom line is that recipes of all kinds should be used as guides not blueprints. An exception to this is if you are working in a professional environment--opposed to your home kitchen--and you want a certain recipe to be exactly the same each time (so when I customer comes back for something they liked on a previous visit it will be the same product each and every time). In that case I would most definitely use a scale for accurate measure and consistent outcome. But in the meantime, bake bread and have fun with it. The more you bake the easier it will be. After a while you will be able to tell what the loaf will be like by what the raw dough looks and feels like.

Bread-making, in my opinion, should be a joy, not a chore. It is easily incorporated into the rhythm of your life; your day should not come to a halt and be dictated by the rising dough. I hope you bake and bake often. I know from personal experience that it is good for a person on  many levels, and that  it has the ability to feed more than just your stomach.
Email Post