Pot Cuisine (for those who claim they can't cook) 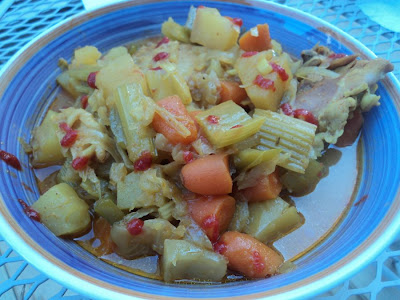 OK...first of all, what I meant by "pot cuisine" was this type of pot, not this type, but I got your attention didn't I?  And why I also say this is for people who claim they can't cook is because I believe anyone can cook...and this is a perfect example of how easy good cooking can be (but this of course can be made by people who do cook...I, after all, cook for a living and I made this).

Anyhow, this is about as easy as it can get...boiled dinner. Nearly every culture has some sort of boiled dinner in their culinary repertoire, and this method of cooking--boiling--is in fact the second oldest method there is (besides cooking directly over a fire, caveman style).

It was about 4pm yesterday and I had been working hard most of the day in my garden and other things in the sun. I was getting hungry and didn't want to stop working but also didn't want to order takeout...I wanted real food. So I checked my pantry and fridge and found some vegetables and chicken legs. I put them in a pot with a few cloves of crushed garlic, a tablespoon each of curry and tandoori spice, a pinch of kosher salt, and enough chicken broth to cover everything. Not wanting to heat up my kitchen I took the pot outside and brought it to a boil on my outdoor stove. This way I could keep an eye on it as I continued to work. I lowered the pot to a simmer and after about an hour the meat was falling from the bone and the potatoes began to thicken the broth. I could have sauteed the vegetable or sweated them first, but that wold have complicated things...I still had dirt on my hands and sawdust in my hair (what remains of it) and wanted to spend a mere 5 minutes in prep time; just enough time to gather the ingredients and put them in a pot. Just before I removed the pot from the heat I stirred in a little lemon juice to brighten it a bit.

I ate dinner on my newly built patio very close to the soil I just tilled. All of these things--cooking, gardening, carpentry--are things that I like to do; they are all productive and give me a sense of accomplishment. I drank wine as I ate (surprise, right?) and sprinkled a bit of Sriracha on the chicken.  My two pugs sat at attention as I ate waiting for scraps to fall ( a few pieces "accidentally" did fall). I was filled in more ways than just physical; it felt good and satisfying.

Anyone can cook, I'm convinced of this. Not everything will be great, but some will...and you will have some flops, too (I certainly do). But with practice comes perfection, or closer to perfection at the very least.  And if you are not sure where to start...just put some stuff in a pot and boil it. 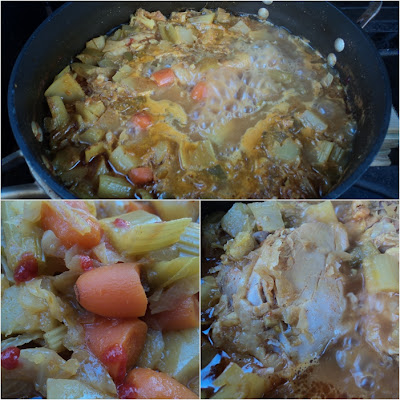