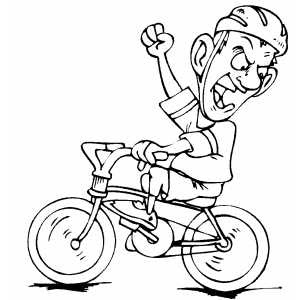 Image found here.
Before I begin I have to state a few things in the event you've not read this before on this blog. Firstly, while I am a bicycle advocate I am by no means car-free but I am car-lite; sometimes more lite than others...and during the summer months I am nearly car-free. Today in fact is the first time I used my car (pickup truck actually) in more than two weeks; it was raining and I had to pick up my son. I am nearly 50 and have been a bicycle advocate for most of my adult life. This said you can image my reaction to what happened to me earlier this evening. But let me also point out that while I generally do not use curse words on this blog there are plenty of them ahead, thus if you find them offensive please read no further.

I was in my truck with my son nearing the intersection of Elmwood and Summer Streets. We were at a near standstill and I started to creep the truck right a bit to turn into a pizzeria (I'd been cooking all day and wanted someone else to cook for me). In my side mirror I saw a few guys on bikes traveling at breakneck speed in our direction. Elmwood Avenue does not have a bicycle lane and is pretty narrow, but still many cyclists traverse it daily; it is actually one of my favorite routes because often the traffic is so heavy that you can move faster on a bike than in a car. Two of the bicyclists fly past the truck (there were four in all) and as they do they pound on the truck and yell "Share the road asshole!"

Wha?...did this just happen? I spend much of my time telling people the virtues of bicycling (in person or via this blog) and also that in order for cyclists to be taken seriously we have to follow the same rules of the road as cars. And these guys are not only yelling at me to share the road...but they called me an asshole too. My blood pressure instantly went through the roof.

I saw that they had stopped at the intersection about twenty or thirty feet ahead so I pulled up next to them. They couldn't cross the intersection because of traffic. I got out of the truck and started to walk up to them just as the light changed. I wanted to talk to them...to tell them that I was on their side. OK, I might have lectured them a bit too, but I never got the chance. I started to say that I own a lot of bikes and was an advocate myself when one of the guys turns to me and simply says, "Fuck you." Another guy gives me the finger and they take off. I was livid. I was so shocked and taken aback all I could muster in response was, "Fuck you too" (what, am I in high school).

I hop back in the truck and begin to follow them...I really wanted to catch them at the next red-light. Now I definitely wanted to lecture them.  They were two cars in front of me and now they pulled out into the middle of the street abreast each other, blocking traffic completely. To my luck a car turned in front of them, causing them to pull over. I went around the cars (and them) and sped up two full blocks and got out of my truck and faced them as they approached. I held up my hand and displayed the peace sign as they approached and yelled out I wanted to talk. They sped up and one guy--as he passed me--actually punched my shoulder; another shouted, "Fuck you, asshole," which seemed to be his personal mantra. But this time it brought out a side of me that even I don't like. They had stopped at a light again and I started walking towards them letting out a litany of cursings that embarrasses me still (mostly because I acted like this in front of my son). "Fuck me," I questioned? "Fuck you, you piece of shit. It's assholes like you that give bicyclists a bad reputation. Why won't you talk to me? Are you afraid? You're not worthy to be on those bikes...assholes." And with that the light changed; a couple of them gave me the finger and they pedaled away from the crazy screaming middle-aged madman.

So now a couple hours have passed, I've eaten my pizza, my son is at a friends house, I've had two glasses of wine, and have had time cool off. In retrospect what do I think of it all? Were the bicyclists jerks? Yes, definitely...but so was I. Did the bicyclists behave badly? Without doubt...but so did I. What I should have done was just let them pass...I certainly am not going to change them. But for whatever reason when they hit the truck with their fist it was like pushing a button. This for me was a true lesson of learning (and maybe that's why this happened). I have written at this blog on more than a few occasions of drivers behaving badly and treating bicyclists like non-vehicles...but this was the first time in my life where I was able to witness through the eyes of a driver what idiots some bicyclists can be (and the even more idiotic behavior it stirs in the driver)...I felt sympathy for car drivers. It is a revelation of sorts.

With the amount of spiritual reading I've done and continue to do I should have been able to control myself. But this is just another proof that though a person may be on a spiritual path they are still human and have much work do do (I have so much to do). Any mystic will tell you that it's not the event itself which causes pain or other disturbance in your life; it's how you react to the event that is causing the problem...and in this case I reacted just as poorly as the bicyclists.

I know that a few people from Buffalo read this blog, but it's highly unlikely that the riders I clashed with tonight do. But in the event that you are, this is what I wanted to say to you:

I did see you coming down the road. And I do share the road with bicyclists. I own six bicycles and one truck. I ride bikes every day and drive my truck about once a week...I am fully aware what it is like to be on a bike in traffic. I'm on your side. But with that (riding bikes in traffic) comes responsibility. We have to follow the same rules as car drivers. We have to do this because it is the law but even more importantly so that we are taken seriously and that bikes are viewed as viable and legitimate forms of transport. If you drove a car tonight the way you rode and acted on your bicycles you may have been locked up. You acted very badly, but my response wasn't much better.

The below image is the back of a shirt I purchased last weekend at the Allen West Festival. I have not worn it yet but I almost did today. Now wouldn't that have been ironic. 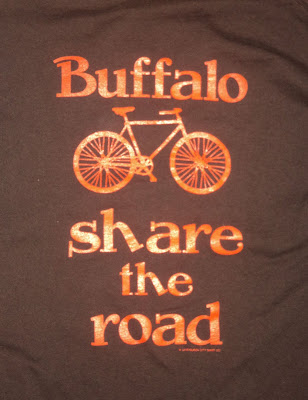 Ugh, how frustrating. I share your regret about situations in which I've acted poorly - including as an indignant cyclist. But you know that saying about how the best revenge is a life well lived? I think perhaps that is the best sort of amends we can make for these sort of confrontations, too. We can learn from our bad experiences but we don't need to let them define our future expectations (or our identities).

Anyway, know that I always enjoy reading your blog - i'll have to try one of your recipes one of these days!

Anonymous said…
Jerks are jerks, whether on bikes, in cars, or on foot. If they'd been in a car, they would have been just as aggressive and belligerent and probably more dangerous.

I don't think I would have been any calmer if I had been provoked like you were. And I think it would have taken much more wine for me to become as philosophical about it as you.

While you feel remorse for your reaction, I doubt they feel the least bit sorry for what they said and did. As Jim said, you are living well.
June 16, 2011 at 11:47 PM

Max said…
As far as I see it, Joe, those guys are fortunate that it was you they interacted with, and not someone with a bit more rage and less understanding.

As Queendebor said, jerks are jerks. And I'll bet the majority of jerks on bikes are just taking a temporary break from their primary avocation of being jerks driving cars. A person on a bike does not a cyclist make.

Joe said…
Thanks Everyone for your kind and reassuring words and comments. It was a surreal experience.
June 17, 2011 at 7:43 PM

Pangolin said…
Aw, c'mon. Tell me you did NOT try and chase down some cyclists in a motor vehicle.

You know the rules.

A jerk on a bicycle is a self-correcting issue. They learn manners or get a Darwin Award; or a least an honorable mention. Case in point: Some lycra bound idiot was speeding through the park and got between me and my dog who was on an extended leash. He got clotheslined right across his neck.

A jerk in a motor vehicle is a danger to all and sundry. Automobile "accidents" kill more people each year than our ongoing wars. More each month than the Sept. 11th attacks. Never be that jerk.

I know how you feel though. I was leisurely slaloming through the park when another lycra-clad no-neck screams "Don't weave" from behind me. He wanted to pass without signaling. I yelled back "Get a bell....Asshole!!"

No I did not chase down the cyclists...but I did (attempt) to approach them on foot, and I did speed ahead of them in my truck. Yes I know the rules (of life...acting like a fellow human, not just a cyclist) and I plead temporary insanity. They were jerks and I was just as big of a jerk; I am not proud of my actions. And no, I don't necessarily think that a jerk on a bike is always a self-correcting issue...I doubt these guys have or will change. But I feel as if I were taught a valuable lesson...that you can't change others but you can change yourself and how you react to things. I feel like I was provoked--yes, in a big way--but it still doesn't give me the right to react the way I did. We were all in the wrong.
June 25, 2011 at 9:18 AM