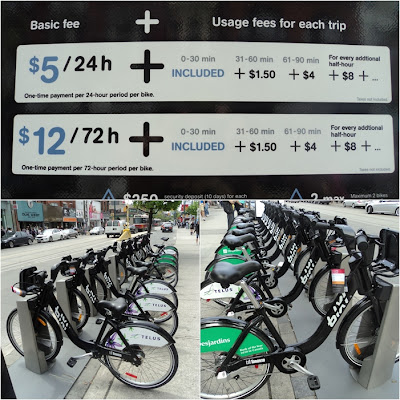 I had mentioned in an earlier post about a recent day trip to Toronto and how I was impressed not only with the amount of people on bikes, but also the somewhat new bike-share program called Bixi (click here or here to read more about Bixi). Bixi began in Montreal but quickly established itself in other major Canadian cities, and has now begun to show up in some American ones as well. I first heard of bike sharing few years ago here in Buffalo when a local orginization started Buffalo Blue bikes, but it's nothing like the professional and prolific Bixi program. This is such an awesome concept. Anyhow, I just came across the below film at Treehugger (but produced by Streetfilms) and was inspired to re-post it here. It's a short film regarding the Chinese bike-share program which is the largest bike-share in the world. It's just a few minutes long but worth your time...these bike-share programs, to me, are a sign of hope.

Anonymous said…
Stuttgart has had one of these years for some time, run by the railway company. It works pretty well, and of they could just improve infrastructure and possibly keep cycle lanes clear of snow in winter it'd work even better.
Only other problem is you need a mobile phone and I refuse to get one
June 4, 2011 at 6:37 AM

Joe said…
Andy, I also do not own a mobile phone and have no plans of getting one...there's probably only a few others in the world besides us without them...
June 6, 2011 at 9:45 PM